The History of Churching. 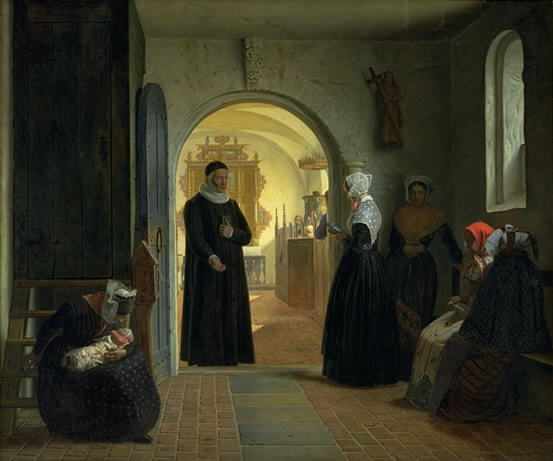 This research tip is a piece of social history, linked to a source. Sometimes at the end of a register, you may find something you don’t expect.

Churchings are one such source:

The medieval Church practised Churching as a rite of purification and thanksgiving for the safe delivery of a woman after the birth of her child. It marked the end of the ‘green month’ of the woman’s confinement and her resumption of normal domestic life and sexual relations with her husband (1). At the Reformation, Non-Conformists rejected churching, but remarkably, the Catholic and Anglican churches continued the practise into the late 19th Century. It was universal at all social levels – even Queen Victoria was churched.

The new mother was presented before the whole congregation, with “accustomed offerings” to the officiating priest: in earlier times a length of cloth known as a chrisom; by the 19th Century a cash stipend.

The chrisom was a piece of white-cloth placed over the child’s head at baptism to stop the consecrated oil (chrism), from rubbing off; later the chrisom was the child’s christening robe. If the child died within a month of baptism, the cloth was used as a burial shroud. By the 19th Century, this custom degenerated to presenting a white cambric handkerchief. The accustomed offerings became a fee paid in cash.

In theological terms, the offering was a tribute due to God, not a fee (2).

In Ireland, all fees paid by the people to the clergy were a political hot-potato. One observer wrote, The Proctor had always as sharp a look out for my mother’s being in the family way, that he may get the Churching money, as he had for the coming young of their sheep and pigs, or any titheable commodity (3).

Evidence of Churchings can be found among the Church of Ireland registers, often as an addendum in the baptismal register. St Werburgh’s in Dublin, has a combined register of baptisms and churchings 1789-1802, not published on the irishgenealogy website. In Cork, Cloyne parish kept a record of churchings 1795-1818; while Kilbrogan has churchings 1756 to 1818. St. Mary’s Clonmel has churchings 1796-1801. This is not intended as an exhaustive list, only the records we’ve worked with.

Evidence of Churchings in Catholic registers is harder to come by, and usually survives in Baptismal registers as notes written in the margins or above the line, as in Kilbrogan RC, county Galway.