John Lodge, The Peerage of Ireland, or a Genealogical History of the Present Nobility of that Kingdom. 1754 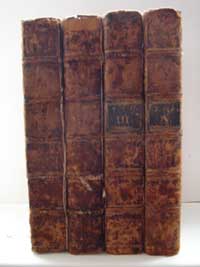 First published in 1754 and republished here is John Lodge's monumental The Peerage of Ireland. Published in four volumes and containing more than 1,700 pages is rightly viewed as the 'first great printed collection of Irish pedigrees and family history, in which a high degree of reliance may be made', according to Burke's Peerage. Revised and republished in 1798, Lodge's work was for Ireland what Dugdale and Collins were to England and his original work is still widely used by genealogists and historians. John Lodge was born at Holton in Lancashire, the son of a farmer. Educated at St. John's College, Cambridge, he graduated B. A., and M.A., in 1719. Settling in Dublin before 1744 he was residing at Abbey Street in 1751. Appointed Deputy-Keeper of the Records of Bermigham Town, Dublin Castle. He later became Deputy-Clerk and Deputy Keeper or the Rolls and Deputy Registrar of the Court Prerogative. He died in Bath, Somerset, in 1774, having married twice and having issuing of nine children only one of who, William (1742-1813) survived. William became Chancellor of Armagh Cathedral and it was to Armagh Library that John Lodge's books and papers can now be found. It was while filling the post as Deputy-Keeper of the Records of Bermigham Tower that Lodge began collating notes from the Patent Rolls that he had readily at his disposal. In addition to numerous other manuscript sources - public and private - earlier published pedigrees and 'personal information' all of these found their way into Lodge's lasting legacy: The Peerage of Ireland, or A Genealogical History of the Present Nobility of that Kingdom. With Engravings of their Paternal Coats of Arms. Collected from the Public Records; Authentic Manuscripts; Approved Historians; Well-attested Pedigrees; and Personal Information. Lodge's original notes were made in cipher, which baffled later authors who wished to revise Lodge's work, including Mervyn Archdall, who was about to give up his task until the key to the cipher was discovered by his wife. The result was Archdall's seven-volume revision of Lodge's work, published in 1789. Containing information not only on the ennobled families of Ireland, Lodge supplied a huge amount of detail on collateral branches often far removed from the removed from the original stock and even gave information on families related simply through marriage. Virtually all of the records used by Lodge were subsequently destroyed in the Four Courts Fire of 1922 and it is to Lodge and his successor, Sir William Betham, that a huge debts of gratitude must be paid for virtually everything that is now known of Prerogative Court and Consistorial Courts in Ireland is down to the tireless transcriptions. John Lodge's Peerage of Ireland remains a much sought after publication and this republication is a chance to own perhaps the pre-eminent publication on the pedigrees of the Irish peerage collateral families and is not to be missed.

Irish Pedigrees; or the Origin and Stem of the Irish Nation, 1876