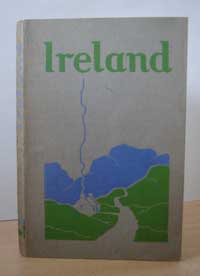 Published in 1931/32 and republished here on fully-searchable CD-Rom is "Ireland", the official publication of the Irish Tourist Association and is one of the earliest efforts by the Irish State to actively promote Ireland as a tourist destination. Containing 164 printed pages this publication covers the entire island of Ireland and represents for each province and county a snap-shot for the tourist of the some of the best-known attractions that Ireland had to offer. The Irish Tourist Association also published smaller editions of tourist information literature at about this time. Also issued in book form these editions offered a slightly more detailed examination of which county destination had to offer the independent tourist. The first Donegal edition, for example, was issued by the Irish Tourist Association in 1930, and contained a meagre twelve pages of text. A decade later, the sophistication of the Irish Tourist Association in attracting visitors to Ireland was witnessed by the inauguration of its Topographical and General Survey. Conducted after World War II, this entailed a detailed information gathering process by surveyors who visited each county and parish in Ireland collecting a recording information on five standard report cards. The information collected formed the basis for the county tourist associations as they are known today. Ireland was published just eight years after the twenty-six counties had gained independence from Britain and can be seen as an early attempt to portray Ireland as a distinct tourist destination from Britain. This publication begins with a lengthy introduction. This introduces the prospective tourist to the delights that awaited them in Ireland: from its rugged geography, to its ancient remains, spectacular scenery and monuments. The introductory remarks are concluded with a glossary of Irish roots for place names. The remainder of the guide is subdivided into travel sections based on the four provinces. Beginning with Leinster and the Irish capital, Dublin, Ireland proceeds to perambulate down the western coast of the province through Wicklow, Wexford and Kilkenny, briefly describing the history and delineating the main attractions for the tourist. The province of Munster begins with its capital, Cork, Connacht with Galway and Ulster with Belfast. Each chapter is illustrated by numerous contemporary sepia-coloured photographs illustrating the attractions described by the guide. The publication includes more than thirty-pages of advertisements by hotels and travel companies, notes and advise to tourists such as the rules and regulations for importing 'motor cars'. Ireland can be seen as one of the earliest attempts of an independent Ireland to sell itself as a tourist destination, especially to America and represents a very interesting account of the how the newly-established Irish Tourist Association thought the rest of the world viewed Ireland and what tourists would find interesting.