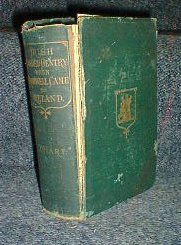 This is one of O'Hart's main publications of family pedigrees from Ireland. In this volume he focuses mainly on families who settled in Ireland from Britain from the medieval period up to the 19th century. This volume contains 231 pedigrees of individual families, dating from as early as the 12th century up to the year of publication (1884). The book also contains copious appendices of historic documents. Many of these deal with the Cromwellian period, including the transplantation to Connaught and the Commonwealth soldiers. There are further records concerning other land settlements from the 17th century, Irishmen serving in continental European armies, and much more besides.