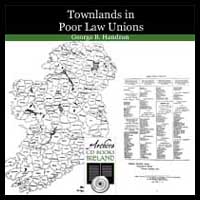 For any Irish historical or genealogical researcher, the importance of Townlands in Poor Law Unions is immeasurable, and is one of only a small handful of must-have reference sources. Originally published in Ireland in pamphlet-form throughout 1885 by the General Register Office by Alexander Thom for Her Majesty's Stationary Office, its is unlikely that the source came into the public domain until it was fortunately collected and privately published by George B. Handran in 1997. Few of Handran's small print-run ended up in private hands and the publication can in the main only be consulted in research libraries and public institutions. The scarcity of Townlands in Poor Law Unions has unfortunately meant that many individuals who have embarked on tracing their Irish ancestry in recent years are unfamiliar or incredibly even unaware of this essential research tool. The present CD-ROM is a copy of Handran's 1997 publication, complete with its six appendices based on handwritten notations and other extraneous detail present in the source used by Handran: the 'Solicitor's Copy' of the original 1885 pamphlets. In many respects Townlands in Poor Law Unions is a more useful research tool for those examining Irish Civil Records of births, deaths and marriages than any of the Indexes to the Townlands of Ireland published decennially between 1851 and 1901. The nature of this usefulness is simply down to the vagaries of the spelling of the Irish townland names, the smallest but most essential administrative unit in Ireland. Townlands in Poor Law Unions presents alphabetically the Unions of Ireland, including those that were dissolved between 1864 and 1923 - these are presented in a number of thorough and very useful appendices - the Unions are further subdivided into Registrars' Districts, Electoral Divisions, Baronies, Parishes and most importantly, the smallest unit of administration: the townland. Between 1824 and 1846 the Ordnance Survey of Ireland mapped and standardised the names of Irish townlands that appeared on the completed and Ordnance Survey Maps. These standardised or in many cases 'Anglicised' townlands names were now deemed to be the official names and spellings of the administrative denominations of Ireland. As such, these standardised forms of Irish names are those that appear in both the Townlands in Poor Law Unions and the Indexes to the Townlands of Ireland. Unfortunately for the researcher, the standardisation of place names is all very well, but runs into difficulty if one considers that a large proportion of the Irish population was illiterate and many of the place names that appear on Civil Birth, Marriage and Death registration certificates prior to the twentieth century are in many cases phonetic renditions of the standardised/official address for a child's place of birth, residence at the time of marriage for a bride and groom and place of death in the case of a death registration. In some cases the Indexes to the Townlands of Ireland prove perfectly adequate in realising the standard form of a place name and hence identifying a child's Civil and/or Roman Catholic parish of birth. However, in many many other cases the standard form of the child's address is not obvious and not easily located in the Indexes to the Townlands of Ireland. In these instances professional researchers turn their attention to the Townlands in Poor Law Unions. Simply knowing the Superintendent Registrar's District for a Civil Registration event allows a researcher to quickly ascertain from the Townlands in Poor Law Unions that the townland of Gurtlochera in the Union of Bantry is officially known as Gortloughera and Ballinatemple as Ballytemple. This edition of George B. Handran's Townlands in Poor Law Unions simply put can save the researcher vast amounts of time and frustration.