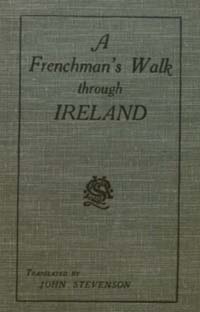 Promenade d'un Français dans l'Irlande was initially published in French in Brunswick in 1798 and in the same year republished in translated form in Cork by 'An Irishman' as A Frenchman's Walk Through Ireland. A number of further editions were published at the turn of the nineteenth century and the next edition, presented here, is John Stevenson's edited and translated version of 1917. A contemporary review described A Frenchman's Walk as a work by a 'witty and observant French Royalist' who toured Ireland on the eve of '98. Stevenson was the author of Pat McCarthy: His Rhymes and a Boy in the Country and admits that his translation of the original text is not literal. He explained that in part that this was because some of De Latocnaye's grammar and syntax was poor, but was due in the main to the author's penchant for expletives. As for De Latocnaye, little is known of him, apart from the facts that he was a Frenchman, originally from Breton and a member of the officer class. His travels through the west of Ireland are especially interesting. De Latocnaye had arrived in England in 1792, fleeing the revolution in his own country. Without a word of English, but with introductions to many eminent and well-connected Englishmen, De Latocnaye embarked on his first two tours, first through England and later in Scotland. In the latter, he revelled in acquiring as much Scots Gaelic as he could, which he put to some effect in the west of Ireland. With wry humour, he noted that many of the old castles in Galway had recently acquired new proprietors who invariably gave their names to their dwellings. De Latocnaye recorded that it was no good asking any local peasant the direction to any of these unless one had already taken the trouble of learning what it was called in Irish. The local inhabitants were either unaware that the castles had been renamed or simply did not wish to learn the new English names for the buildings that they had known since birth. A Frenchman's Walk encompasses 287 pages of engrossing observation as De Latocnaye walked for almost a year through at least half of the counties of Ireland during the period 1796-7. Carrying letters of introduction from England where he had conducted a similar journey meant that De Latocnaye invariably sampled the higher end of the hospitality of Irish society. However, this was not always the case and the travelogue has been praised for its earthy commentary and observations on all manner of Irish people and the author would appear to revel in the lives of ordinary Irish peasants. This was illustrated when he was refused hospitality by a marquis and instead took shelter for the night in the cabin of a poor beggar woman, some half naked children and a menagerie of animals. A considerable part of the value of the Frenchman's Walk is the period in which the tour took place. At one moment the author can be found in protracted conversation with a United Irishman, whose cause De Latocnaye certainly sympathises, and in the next is found dining with a Government Official in Banbridge. Herein lies one of the beauties of De Latocnaye's Walk. Although obviously an educated man of some class, as a foreigner he readily mixed with, and would appear to have been accepted by, all strata of Irish Society. As his tour takes places on the eve of the '98 Rebellion his observations as an outsider on the justices and injustices prevalent in Ireland make for keen social commentary and fascinating reading.