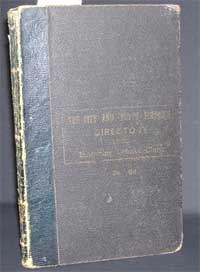 The Directory of the City of Limerick & County Clare & Limerick was printed in Limerick by H. & E. Ashe in 1891-2. While Dublin City and County are replete with trades' and residential directories from the mid-eighteenth century to the present day, many of the Ireland's other counties are bereft of such directories. Between 1769 and 1894 there have only been fifteen published directories in which all or part of Limerick and Clare have been featured. Of the fifteen published directories, only two, apart from H. & E. Ashe's Directory specifically treat on Limerick City and County as well as County Clare, and as such, this republication will be of particular interest to those who have an interest in these counties. This edition of H. and E. Ashe's Directory of the City of Limerick & County Clare & Limerick contains two hundred and five pages of text and includes handwritten annotations of the names of occupants in Limerick City by the Directory's first owner as well as a large number of full-page advertisements placed by local Limerick tradesmen, merchants and shopkeepers. The Directory proper is introduced by a relatively standard history of Limerick City, but this included special notices on the city's harbour and docks, including the duties paid on incoming shipping into the city, which was compiled by the incumbent Port Engineer, Mr. W. J. Hall. The Directory also includes postal and telegraph information, including the closing post for rail postage on the major railway lines that once traversed the county the county. Also present in the Directory are the Rules and Regulations for Hackney Cars and Carriages as laid down by the Corporation of Limerick, which includes a list of standard fares within the Borough of Limerick City as well as the addresses for all the religious, social and civic institutions, together with the name of their incumbents. Of particular interest will be the complete street directory for the residents of the city and an alphabetically listing of the same. The county portion of the Directory for Limerick is fairly substantial and much more so than some of Ashe's contemporary competitors who were publishing national rather than local directories. Ashe treats on all the major villages of towns of Limerick County recording all the major gentlemen, professionals, farmers, traders and merchants connected with each. The Directory also lists the schools, religious, civic and social institutions associated with each town and village, all of which provides excellent social and demographic data, which has obvious benefits for the social historian and family history researchers. Ashe's Directory also includes details of the main residents of the larger villages and towns of County Clare. This is of particular interest as there are very few if any directories published specifically for the county This CD-Rom republication of Ashe's 1891-2 Directory is fully searchable and should grace the shelves of genealogists and scholars with an interest in counties Clare and Limerick.