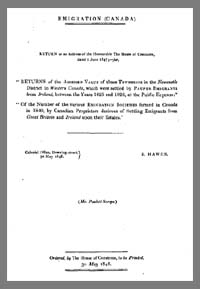 The official title of this parliamentary paper is: "Return of the Assessed Value of the Townships in the Newcastle District in Western Canada, which were settled by Pauper Emigrants from Ireland, between the years 1825 and 1828 at the public expense: Of the number of various Emigration Societies formed in Canada in 1840, by Canadian Proprietors desirous of Settling Emigrants from Great Britain and Ireland upon their Estates. (1848)" This parliamentary paper publishes the correspondence and extensive supporting documents of the British government with the Governor-General of Canada concerning the settlement of poor Irish in the Newcastle District in 1826 ("Mr. Robinson's Emigrants"). This was the result of a Commons request to be furnished information on the settlement as it had been publicly funded. Initially the Governor-General just sent updated valuations of the relevant townships (Ashpodel, Douro, Dummer, Emily, Ennismore, Ops, Otonabee and Smith) which had since be redesignated as part of the District of Colbourne. But following further demands for information he sent a detailed breakdown of every plot settled by Irish paupers in 1826 by Peter Robinson. This table lists the lot number, concession, acreage, name of the 1826 settler, number of acres cleared by 1847, number of horses and horned cattle on the plot, and the total number of the settler's family. Lastly the table gives notes on the name of the present occupant of the lot, their relationship to the settler, and any other critical pieces of information (like relationship to other settlers, or the place they have relocated to, etc.). In total around 360 plots are covered, giving details on over 700 people. The paper also deals with an associated question raised by the Commons in London. They had requested to find out about societies set up privately to promote the settling of people from Britain and Ireland in 1840. As a consequence a full report was delivered with particulars of the formation of "The Canada Emigration Association," established at Toronto in 1840. In an accompanying report with this collection of documents about the association and its members, it is stated that the association did not last for more than the first year, due to lack of support. While this is a short publication of only 18 pages, it is an essential resource for the Robinson Irish settlers.

The Irish Emigrant's Guide for the United States, 1890