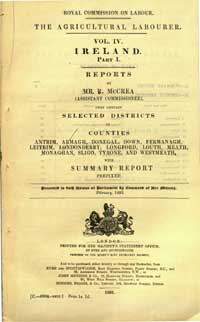 The Royal Commission on Labour commissioned the reports into the conditions of the Agricultural Labourer in the Poor Law Unions of Ireland, which were carried out primarily in the 1890s. The reports mirrored a survey that was carried out in England previous to the Irish reports. The results, particularly for many of the Poor Law Unions in the West of Ireland were shocking. They painted a picture that had changed little since the famine for the agricultural labourer. The report covered the issues of Supply of Labour, the Conditions of Engagement, Wages and Earning, Cottage Accommodation, Gardens, Benefit Societies, Trade Unions, General Relations and General Conditions. The areas covered in this particular report are the Poor Law Unions of Cookstown (Co. Tyrone), Ballyshannon (Counties Donegal, Fermanagh and Leitrim), Ardee (Counties Louth and Meath), Downpatrick (Co. Down), Clones (Counties Monaghan and Fermanagh), Letterkenny (Co. Donegal), Limavady (Co. Derry), Ballymena (Co. Antrim), Castleblayney (Counties Armagh and Monaghan), Dromore West (Co. Donegal) and Ballymahon (Counties Longford and Westmeath). Because of the geographical spread covered the results vary with Limavady, Downpatrick, Ballymeena and Cookstown classed as good; Ballymahon, Ballyshannon and Dromore West as poor. In some cases the cottages were little more than mud cabins, which may have had up to 8 people living in them. However, this can be contrasted with areas that give very "favourable accounts". Each report is accompanied by detailed statistical returns as well as comments by several of the leading gentlemen of the area. Information was also collected from the labourers themselves, and often their condition is described in some detail, giving their name, address and other personal details. Common themes throughout the reports are the decreasing number of labourers owing to emigration and the lack of winter work. In cases where the conditions were poor much of the blame was placed on the laziness and lack of thrift of the labourers. This report is fascinating insight into a class of Irish life that was slowly disappearing which is already evident from the evidence supplied. The large area covered makes it particularly interesting, as the differing standards are all too easy to observe. This report offers a vital insight into the social and economic conditions of the country as it approached the 20th century.