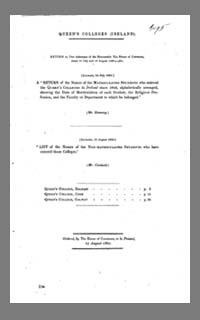 The Queen's Colleges of Ireland were established by the Queen's Colleges (Ireland) Act 1845, which allowed for the creation of universities to cater for all religious denominations. Under this act the Queen's Colleges of Belfast, Cork and Galway were formally incorporated in 1845 and opened their doors to students in October 1849. This publication, of the official returns to the House of Commons, lists the names, religion and department of students who entered the colleges either through the matriculation exam or by other means, over the first ten years of the colleges. The approximate breakdown of figures for each university is as follows: Belfast 930, Cork 680, and Galway 245. The final part of the publication covers the numbers of students who took their first degrees between the 31st March 1858 and the 31st March 1859. Also covered is the amount "paid out of the Consolidated Fund, or by Annual Votes of Parliament" for the maintenance and running of the Queen's University and the Queen's Colleges.