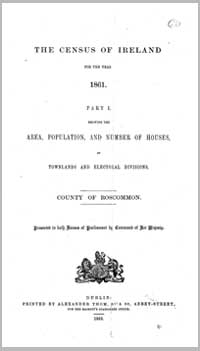 Government census taking began in the early nineteenth century in Ireland. The first, and partial, census was carried out in 1813. This was followed in 1821 with the first complete countrywide census on 28 May. A new census was taken every 10 years after this date, up to 1911. The census for 1921 was never carried out because of the disarray caused by the War of Independence. Censuses for what is now the Republic of Ireland began in 1926. The aim of the census was to understand the size and make-up of the Irish population to better inform government policy. As a consequence the range of questions asked, and information gathered, in each of the census returns 1821-1911 varied. In general they got progressively more detailed as new issues were felt important enough to analyse statistically. The majority of Irish census returns from the nineteenth century were destroyed. The 1861-91 census returns were officially destroyed in their entirety, partly because of paper shortages at the outbreak of the World War in 1914. Earlier returns (1813-51) were mostly destroyed with the destruction of the Public Record Office at the outset of the Civil War in 1922. But the statistical results from all these census returns were compiled into tables and printed for circulation among civil servants and politicians. From 1851 to 1911 these statistical tables and accompanying analysis were printed in a volume for each county for each year. It is these county reports that are reproduced here on CD-ROM or digital download. Initially these tables recorded the numbers, ages and gender of the population by townland, civil parish and barony. These figures are important as they describe the changing circumstances of each district in Ireland and provide contextual information for family and social history. The reports usually list the change in population over the previous 10 years, so at a glance you can see the impact of the Famine in the 1851 reports. From 1871 the information gathered increased dramatically, and tables of statistics concerning "conjugal condition" (i.e. marital status), occupation, location of birth, disability, religious profession, education, emigration and foreigners appear. The reports are far more than dry statistical tables. With this information the experience and composition of a townland can be tracked over the decades. Families and individuals were part of a wider townland community, and knowing that history can help researchers assess the social environment of a family. This provides essential background and context for any family history. This collection of official census reports for County Roscommon includes the following years: 1851, 1861, 1871, 1881, 1891, 1901 and 1911. Together these reports come to 687 pages.