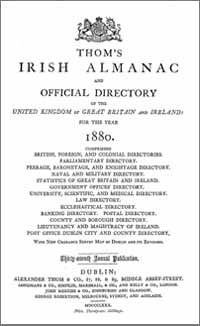 Published from 1844 until the present day, Thom's Irish Almanac is rightly considered the pre-eminent almanac for Ireland, but the massive scope of this annual publication is sometimes forgotton or overlooked. A glance at the subtitle title for this publication gives an indication as to the depth and breadth of the information contained therein: Comprising British, Foreign and Colonial Directories. Parliamentary Directory. Peerage, Baronetage, and Knightage Directory. Statistics of Great Britain and Ireland. Government Offices Directory. University, Scientific and Medical Directory. Law Directory. Ecclesiastical Directory. Banking Directory. Lieutenancy and Magistracy of Ireland. Post Office Dublin City and County Directory. In total this publication contains over 1800 pages of statistical and residential information, which does not include the general index that requires some 30 pages and 50 pages of advertisements at the end of the edition. Although Thom's Irish Almanac is rightly seen as an Irish directory it is often overlooked that a third of the almanac is given over to Great Britain. This details all members of parliament, state functionaries, officers in the army and navy, Peerage and Baronetage and county officials and even provides obituaries for noted persoanges who died in 1879. However, as an almanac and directory the detail provided by Thom's on Ireland is unsurpassed as both a county and Dublin directory and nationwide almanac. Some 700 pages in 1880 edition are given over to the the multitude of state functionaries, civil, religious, financial and military. This includes all the incumbents of the various parishes and benefices in Ireland, all army and navy officers, barrister and solicitors, doctors and physicians, all educational and medical institutions and members of their governing bodies and even the clubs and private institutions, such as learned and academic societies and members of their respective councils. County by county, the alamanac and directory provides statistical information on each county derived from the 1841, 1851, 1861 and 1871 Population Censuses as well as the names of all the civil functionaries ranging from the deputy lieutenant of the county down to local magistrates, the places and dates of county fairs, poor law unions, petty sessions and polling stations. The level of detail provided in the directory and almanac increases greatly once the directory reaches Dublin City and county. A third of the publication is given over to the country's capital and its immediate environs. For the capital itself a street directory is provided and this extends to the various townships such as Rathmines, Pembroke and Kingstown as well as the residents of many of the larger villages, which at this time had not been incorporated into the city. In addition, Thom's provides a list of the Dublin City and county nobility, gentry, merchants and traders as well as a trades directory and it is to the street and trades directories that most people are drawn to in search of their Dublin ancestors. Republished here in digital format, at least one edition of Thom's Directory and Almanac is a must for every household.