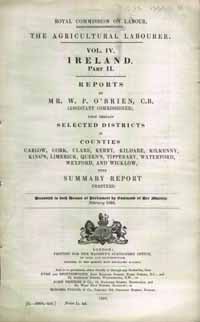 Published by HMSO from evidence given to both house of Parliament in February 1893 by Assistant Commissioner W. O. O'Brien, the full title of this publication gives some idea as to its nature and scope: 'Royal Commission on Labour: The Agricultural Labourer. Vol. IV. Ireland, Part II, Reports by Mr. W. P. O'Brien C.B., (Assistant Commissioner) upon certain selected districts in counties Carlow, Cork, Clare, Kerry, Kildare, Kilkenny, King's, Limerick, Queen's, Tipperary, Waterford, Wexford and Wicklow'. In fact, the information presented in the 138 Report was taken from the Commissions Surveys of eleven Poor Law Unions, namely Kenmare, Kanturk, Nass, Ennistymon, Cashel, Wexford, Lismore, Thomastown, Kilmallock, Mountmellick and Carlow and is one of a number of similar reports into the state of agricultural labourers that taken together are the most comprehensive survey of the condition of agricultural labourers undertaken; the Commission undertook inquiries into 41 aspects of the lives of Irish labourers. This evidence was derived from a plethora of sources, which give both this and the Commissions conclusions great validity. Amongst the sources from which evidence was garnered were secretaries of local labour leagues, land agents, independent witnesses, Poor Law Union Guardians, parish priests as well as personal interviews by the Commissioner and his agents. These interviews included visiting labourers' cottages in each of the subdistricts of the unions surveyed and much of the firsthand evidence gathered revealed the depressing conditions experienced by the rural and urban labourer alike. The scope of the Commission's inquiry was as far-reaching as were its final conclusions. The specific areas of inquiry were as follows: supply of labourer; immigration; conditions of engagement; terms of engagement; hours of labour and meal times; Sunday work; wages and earnings; piece work; mode of payment; prerequisites and allowances; wages earned and other employments; estimated annual earnings; diet of labourers and their families; cottage accommodation; suggested amendments to Labourer's Acts as well as a plethora of evidence as to way and means of improving labourers wages, housing and conditions; garden allotments, cultivation plots and allotments for town labourers; live stock, bee industry, cow runs and pastures; benefit societies, trade unions, relations between employer and employee; general condition of town and agricultural labourers; age and size of families and the effect of early marriages and large families. In short, the Commission probed into every conceivable aspect of labourer's lives and probably extended its scope beyond its original remit by inquiring into the conditions and circumstances of town labourers, miners and women labourers both town and country. Taken as a whole the 1893 Royal Commission on Labour provides provides some of the best social, economic and historical data available for the labouring classes of Ireland towards the end of the 19th century and will be a useful time for academics and those simply interested in the socio-economic conditions experienced by much of the population of Ireland in the 1890s.