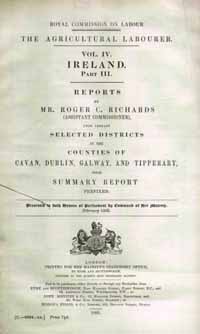 Published by HMSO from evidence given to both house of Parliament in February 1893 by Assistant Commissioner Mr. C. Rogers, the full title of this publication gives some idea as to its nature and scope: 'Royal Commission on Labour: The Agricultural Labourer. Vol. IV. Ireland, Part III, Reports by Mr. C. Rogers, (Assistant Commissioner) upon certain selected districts in counties Cavan, Dublin, Galway & Tipperary'. In fact, the information presented in the 80 page Report was taken from the Commission's Surveys of four Poor Law Unions, namely Loughrea, Roscrea, Balrothery and Bailieborough and is one of a number of similar reports into the state of agricultural labourers that taken with the reports that covered the remainder of the county constitutes one of the most detailed investigations into the conditions of agricultural labourer in Ireland ever undertaken. The evidence presented in the Reports derived from a plethora of sources, which give both this and the Commission's conclusions great validity. Amongst the sources from which evidence was garnered were secretaries of local labour leagues, land agents, independent witnesses, Poor Law Union Guardians, parish priests as well as personal interviews by the Commissioner and his agents. These interviews included visiting labourers' cottages in each of the subdistricts of the unions surveyed and much of the firsthand evidence gathered revealed the depressing conditions experienced by the rural and urban labourer alike. The scope of the Commission's inquiry was as far-reaching as were its final conclusions. The specific areas of inquiry for volume IV part III were as follows: Railway communications; difference in attitude of English and Irish employers; unions compared as to supply of and demand for labour; everywhere a considerable amount of labour done by farmers and families; probable influence of cottage gardens on future; supply of labour.; hours of labour; difficulty of estimating total earnings; comparison between pay of ordinary labourers and farm servants in Bailieborough and Belper; construction of cottages; exercise of sanitary powers in England and Ireland; attitude of some guardians to 'Labourers' Acts'; labourers' opinions as to administration; ownership various; some freeholders. Mostly sub-let by farmers; rates paid by landowners and farmers jointly; influence of wretched houses on condition; uncertainty of employment. These differed only slightly from area or inquiry conducted into the conditions of agricultural labourer in other parts of the country and a total of 51 areas of agrarian society were examined by the Commission. The Commission for part III concluded that their 'Inquiry well received, especially by labourers'. In short, the Commission probed into every conceivable aspect of labourer's lives and probably extended its scope beyond its original remit by inquiring into the conditions and circumstances of town labourers, miners and women labourers both town and country. Taken as a whole the 1893 Royal Commission on Labour provides provides some of the best social, economic and historical data available for the labouring classes of Ireland towards the end of the 19th century and will be a useful time for academics and those simply interested in the socio-economic conditions experienced by much of the population of Ireland in the 1890s.

Ulster for your holiday, The Ulster Tourist Development Association Ltd., 1939