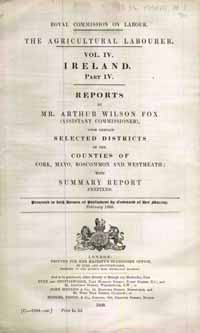 Published by HMSO from evidence given to both house of Parliament in February 1893 by Assistant Commissioner Mr. Arthur Wilson Cox, the full title of this publication gives some idea as to its nature and scope: 'Royal Commission on Labour: The Agricultural Labourer. Vol. IV. Ireland, Part IV, Reports by Mr. Arthur Wilson Cox, (Assistant Commissioner) upon certain selected districts in counties Cork, Mayo, Roscommon & Westmeath'. In fact, the information presented in the 146 page Report was taken from the Commission's Surveys of four Poor Law Unions, namely Wesport, Castlereagh, Skibbereen and Delvin and is one of a number of similar reports into the state of agricultural labourers that taken with the reports that covered the remainder of the county constitutes one of the most detailed investigations into the conditions of agricultural labourer in Ireland ever undertaken. The evidence presented in the Reports derived from a plethora of sources, which give both this and the Commission's conclusions great validity. Amongst the sources from which evidence was garnered were secretaries of local labour leagues, land agents and landlords, independent witnesses, Poor Law Union Guardians, parish priests as well as personal interviews by the Commissioner and his agents. These interviews included visiting labourers' cottages in each of the subdistricts of the unions surveyed and much of the firsthand evidence gathered revealed the depressing conditions experienced by the rural and urban labourer alike. The scope of the Commission's inquiry was as far-reaching as were its final conclusions. The specific areas of inquiry for volume IV part IV were voluminous and taken with the conclusions covered 108 areas of specific enquiry. The main headings of the inquiry for part IV were as follows: Part I, which set out the conditions of the inquiry for part IV and included descriptions of the Poor Law Unions examined, money expended by the Unions, the general conditions of labourers, population, earnings, congestion and rates of emigration. Part II dealt specifically with the supply of labour and made inquiry into areas such as the impact of mechanisation, numbers employed in the past decade, employment of women and the efficiency of labour. Part III considered conditions of engagement and included inquiries into the effects of diet, tea and alchahol drinking and seasonal hours worked in all sectors of the rural economy. Part IV details wages and earnings of the agricultural labourer and under 25 subheadings analysis in considerable details wage as opposed to incomes in kind experienced in the four Unions visited by the Commissioner's of Inquiry. Part V examined the conditions of accommodation and part VI the types and usage of lands leased by the rural labourer. Part VII examined the role played in the rural economy by benefit societys and trade unions whereas part VIII reported on the relations between employer and employee. The report concluded in parts IX and X by comparing the overall conditions of agricultural labourers in the Poor Law Unions of Westport, Castlereagh, Skibbereen and Delvin with those in Norfolk and Suffolk, England. These areas of inquiry differed only slightly from areas of inquiry conducted into the conditions of agricultural labourer in other parts of the country, but part IV did consider the most areas of agrarian society were examined by the Commission. In short, the Commission probed into every conceivable aspect of labourer's lives and probably extended its scope beyond its original remit by inquiring into the conditions and circumstances of town labourers, miners and women labourers both town and country. Taken as a whole the 1893 Royal Commission on Labour provides provides some of the best social, economic and historical data available for the labouring classes of Ireland towards the end of the 19th century and will be a useful time for academics and those simply interested in the socio-economic conditions experienced by much of the population of Ireland in the 1890s.