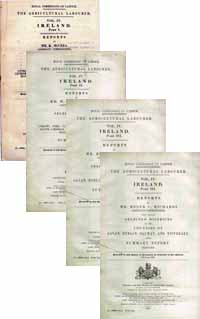 The Royal Commission on Labour: The Agricultural Labourer, was published in 1893 after evidence from the Report was presented to both Houses of Parliament. The range, depth and scope of the inquiry, meant that the report's findings and conclusions were the most comprehensive ever conducted into the conditions of the agricultural labourer in Ireland. The information presented in the 496 page Reports was taken from the Commission's Surveys of 30 Poor Law Unions, namely: Vol. 1: Cookstown, Ballyshannon, Ardee, Downpatrick, Clones, Letterkenny, Limavady, Ballymena, Castleblayney, Dromore West and Ballymahon Vol. 2: Kenmare, Kanturk, Nass, Ennistymon, Cashel, Wexford, Lismore, Thomastown, Kilmallock, Mountmellick and Carlow Vol. 3: Loughrea, Roscrea, Balrothery and Bailieborough Vol. 4: Wesport, Castlereagh, Skibbereen and Delvin As a conseqeunce it covers almost every county and region in Ireland, and constitutes one of the most detailed investigations into the conditions of agricultural labourer in Ireland ever undertaken. The evidence presented in the Reports derived from a plethora of sources, which give both this and the Commission's conclusions great validity. Amongst the sources from which evidence was garnered were secretaries of local labour leagues, land agents and landlords, independent witnesses, Poor Law Union Guardians, parish priests as well as personal interviews by the Commissioner and his agents. These interviews included visiting labourers' cottages in each of the subdistricts of the unions surveyed and much of the firsthand evidence gathered revealed the depressing conditions experienced by the rural and urban labourer alike. In short, the Commission probed into every conceivable aspect of labourer's lives and probably extended its scope beyond its original remit by inquiring into the conditions and circumstances of town labourers, miners and women labourers both town and country. Taken as a whole the 1893 Royal Commission on Labour provides provides some of the best social, economic and historical data available for the labouring classes of Ireland towards the end of the 19th century and will be a useful for academics and those simply interested in the socio-economic conditions experienced by much of the population of Ireland in the 1890s. The 496-pages is republished here in fully-searchable CD-Rom format is a must for anyone interested in the conditions of Irish agricultural and town labourers at the turn of the 19th century. Each individual volume is also published seperately (thereby reducing the cost) and can be found on the appropriate county page.

Curious Family History or Ireland Before the Union. 1869

The Journal of the Association for the Preservation of the Memorials of the Dead Vol IV for the years 1898-1900. 1900