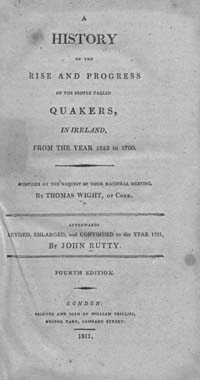 This fourth edition of A History of the Rise and Progress of a People called Quakers in Ireland was first compiled by Thomas Wight, covering the years 1653 to 1700 and was later updated to 1751 by the physician and naturalist John Rutty. The book begins with the first appearance of Quakers in Ireland and the first chapter concludes in 1669 with the settlement of "church discipline" among them. The second chapter covers up to the end of the troubles under King James II. Chapter three deals with the period up to the Act of Parliament which allowed for the registration of the meeting houses of the Society of Friends, in 1719. The final chapter ends in 1751 with the church in danger from "a spirit of libertinism and luke-warmness". The book then concludes with a Summary of the sufferings of Quakers in Ireland.