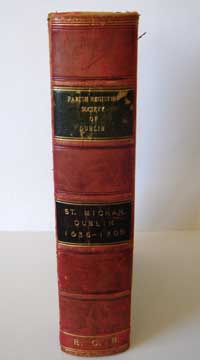 Printed for the Parish Register Society of Dublin by Alexander Thom & Co., and first published in 1909 are volumes II, III and VII of the Parish Register Society of Dublin, the Registers of St. Michan, Dublin, 1634-1700. Republished here the registers for St. Michan are amongst the oldest surviving parish records in Ireland and unusually for city parishes from this period the register entries are of a most complete nature. By Act of Parliament on 1875 the parish registers of the Established Church of Ireland were placed under the Control of the Master of the Rolls. However, by the time of the publication of volume I of one of the main conditions of the Act, namely the concentration, collection and depositing of the parish registers of the former Established Church in the Public Record Office of Ireland in Dublin, had not taken place. In a sense and with hindsight this transpired to be fortuitous as many of the parochial records that did find their way to the Public Record Office were destroyed in the infamous 1922 fire. In line with the formation of a number of Parish Register Societies in England, it was deemed necessary by the founding members of the Parish Register Society of Dublin to make publicly available the older and more important surviving parish registers of the Established Church of Ireland, beginning with the oldest in the country, those of Dublin City, for the valuable work undertaken by genealogists and local and family historians. There would appear to have been no obligation to keep parish registers in Ireland until the Canon of 1634, although there had been an abortive attempt to introduce a form of public registration as early as 1617. However, this was discontinued in 1620 in a row over fees, the year after the commencement of the St. John's registers. The Canon of 1634 required every parish and chapel in Ireland to keep a book wherein must be written the day and year of every Christening, marriage and burial. The Canon does no appear to have been strictly enforced as no registers in Ireland begin immediately after the date of instruction. Only two registers in Ireland pre-date the Canon, that of St. John's and St. Brigid, Dublin and in only five other instances are registers known to pre-date 1642, amongst these are the registers for St. Michan, which date from 1636. The Parish of St. Michan was from a very early period until the seventeenth century the only parish church standing on the north bank of the River Liffey. Tradition states that the Church was built in 1095 and encompassed the area bounded by Little Cabra, Dublin Bay, the Phoenix Park and the River Liffey. As the number of inhabitants within these bounds grew new parishes had to be divided out of the old St. Michan's, resulting in the formation in the mid-seventeenth-century of Saints Paul, John and lastly Thomas. The registers for t. Michan are unlike any those of the other old city parishes in as much as full-particulars are given for the deceased in the burial registers and in some instances the marriage entries, especially during the Commonwealth period, which run to as many as eight lines.