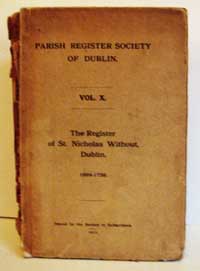 Printed for the Parish Register Society of Dublin by William Pollard & Co., and first published in 1912 is volume X of the Parish Register Society of Dublin, the Register of St. Nicholas Without, Dublin, 1694-1739. Republished here is the earliest surviving register for the Church of St. Nicholas Without which are amongst the oldest surviving parish records in Ireland. By Act of Parliament in 1875 the parish registers of the Established Church of Ireland were placed under the Control of the Master of the Rolls. However, by the time of the publication of volume I of the Parish Register Society in 1906, one of the main conditions of the Act, namely the concentration, collection and depositing of the parish registers of the former Established Church in the Public Record Office of Ireland in Dublin, had not taken place. In a sense and with hindsight this transpired to be fortuitous as many of the parochial records that did find their way to the Public Record Office were destroyed in the infamous 1922 fire. In line with the formation of a number of Parish Register Societies in England, it was deemed necessary by the founding members of the Parish Register Society of Dublin to make publicly available the older and more important surviving parish registers of the Established Church of Ireland, beginning with the oldest in the country, those of Dublin City, for the valuable work undertaken by genealogists and local and family historians. There would appear to have been no obligation to keep parish registers in Ireland until the Canon of 1634, although there had been an abortive attempt to introduce a form of public registration as early as 1617. However, this was discontinued in 1620 in a row over fees, the year after the commencement of the St. John's registers, the oldest surviving parish registers in Ireland. The Canon of 1634 required every parish and chapel in Ireland to keep a book wherein must be written the day and year of every Christening, marriage and burial. The Canon does no appear to have been strictly enforced as no registers in Ireland begin immediately after the date of instruction. Only two registers in Ireland pre-date the Canon, that of St. John's and St. Brigid, Dublin and in only five other instances are registers known to pre-date 1642. In many senses the Parish of St. Nicholas Without is an unusual City Parish. The parish itself was recognised as early as the 12th century, but had no church of its own, the parishioners worshipping in the north transept of the Cathedral Church of St. Patrick and burials taking place in the 'Cabbage Garden' close to the Cathedral. The parish of St. Nicholas Without extended from Kevin Street on the east, to the west end of the Coombe and from the wall on the north to the Cherryorchard near Haroldscross and all of the numerous streets and alleys in between. And as a consequence was probably more densely populated than at the beginning of the 20th century. This situation led to the creation of the new parish of St. Luke. At the time of the restoration of St. Patrick's, St. Nicholas Without was removed from the Cathedral and reunited with St. Luke. As to the registers themselves, far more Burials than Christenings and it has been surmised that while the registers contain the Christenings for only members of the Established Church, the Burial Registers hold the records for all denominations present in the parish. Until the early 1900s an earlier register for the parish was extant for the periods 1631-1660, but the whereabouts of this then as now is not known. While the Parish Register Society of Dublin had announced that this publication was to continue to 1739, through lack of subscriptions the burials contained therein were cut short and ceased in 1720. The general lack of monies from subscribers to the publication of the Parish Registers meant that that this issue was one of the last undertaken by the Society. Republished here in fully-searchable electronic format, the register for the Parish of St. Nicholas Without from which the entries republished here were taken contained 322 pages, with this publication containing just over 300 pages of text, including an index of names and family names. The Republication of this number in the series of the Parish Register Society of Dublin remains as relevant to the genealogist and family historian today as they were when the registers were first published.