Some Notes of an Irish Exile of 1798, Being the Chapters from the Memoirs of Miles Byrne relating to Ireland (1910) 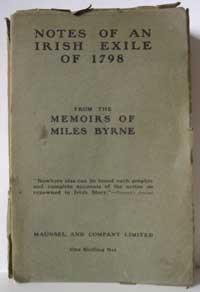 Republished here is Some Notes of an Irish Exile of 1798: Being the Chapters from the Memoirs of Miles Byrne Relating to Ireland published in Dublin by Maunsel & Co., in 1907. This publication was taken from Byrne's complete memories, which had been edited by Byrne's wife and published in Paris in three volumes the year after his death in 1863. In 301 printed pages Some Notes of an Irish Exile of 1798 treat on Byrne's involvement as as a leader of the United Irishmen during some of the bloodiest fighting of the Rising in Wicklow and Wexford, through to his encounters with Robert Emmet at the end of the Rebellion. Miles Byrne was born at Ballylusk, Monaseed, Co. Wexford in 1780 and like many of the leaders of the United Irishmen in 1798 was extremely young - Byrne himself had turned just eighteen and had already been involved in preparations for the Rising with Anthony Perry of Inch, the chief organiser in the area. Byrne participated in all of the major battles of the 1798 Rising in counties Wicklow and Wexford, including those at Oulart, Clough, Vinegar Hill, Enniscorthy, Arklow and the last battle in County Wexford, at Ballygullen in 4th July 1798. All of these battles are vividly portrayed in his Memoirs as are the brief respites between the battles where he passes his eye and pen over the carnage wrought throughout the countryside by both sides during the campaign. After the failure of the Rising Byrne went on the run in the Wicklow mountains were he joined up with Michael Dwyer and Robert Hold and continued a guerilla campaign and later worked as a clerk and in his half-brother's timber yard as a foreman. It was during this period that Byrne met Robert Emmet and organised and commanded a group of Wexford men that were to participate in Emmet's abortive Rising of 1803. Byrne fled to Paris before Emmet's arrest and joined-up with Emmet's brother, Thomas Addis Emmet. When the Irish Legion was formed by Napoleon he joined with the rank of Sous-Lieutenant; later he was promoted to Lieutenant and later to the rank of Captain of the Grenadiers. He fought in the Napoleonic campaign (1804 - 1815) in France, Spain and Greece and was eventually retired after thirty-years service and seventeen campaigns with the rank of Lieutenant-Colonel when the British Government forced the dismissal of the officers of the Irish Legion on half pay and disbanded the Legion. He received the Cross of Officer of Legion of Honour from Louis Phillipe in 1832. After his retirement Byrne began to write his Memoirs and held court to the many Irish nationalists that came to Paris, some exclusively to meet the old warrior. Amongst these was a visit in 1860 by John Mitchel, who famously described Byrne as 'one of those rare beings who never grow old'. For the battles and areas covered, Byrne's Memoires are recognised as one of the most authoritative accounts of the 1798 Rising and a must read for anyone interested in accounts of the 1798 Rising in general and more especially the campaigns in Wicklow and Wexford.