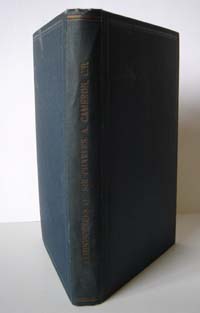 Originally published in Dublin and London in 1913, the Reminiscences of Sir Charles A. Cameron, C.B., is here republished in fully-searchable format. Sir Charles Alexander Cameron (1830-1921) was born in Dublin, one of three children of Ewen Cameron, a soldier. Cameron studied medicine on Dublin and chemistry in Germany and was appointed Professor to the Dublin Chemical Society at the age of 23. Awarded a Fellowship of the Royal College of Surgeons in Ireland in 1874 he also obtained a diploma in Public Health from Cambridge University and it was in the area of public health that Cameron undertook his most important work. Cameron held the post of Medical Officer for health for more than 50 years until his death and during this period he played a key role in improving the living conditions for the poor of Dublin and for this work he received a large number of honours, including a knighthood and the highest civic award the Corporation of the City of Dublin could afford: Honorary Freeman of the City. Apart from his numerous articles for medical journals Cameron was also the theatre critic for the Irish Times; correspondent and co-owner of the Agricultural Review, and a reputed great socializer. A staunch unionist, Cameron was equally at home in the company of actresses and royalty. His last public appointment was camp inspector for Frongoch, North Wales, where hundreds of the participants in the Easter Rising were interned. Sir Charles Cameron's Reminiscences are recorded in just under two-hundred printed pages and detail the myriad of events and experienced during a long and industrious life. These reminiscences are noted in some eighty or so anecdotes, which at times range from the sublime to the incredulous. Writing in his eighties Cameron was brought to book for a number of his reminiscences, which critics claimed, even at the time of their publication, were pure fabrication. Whether or not this fabrication extends to some of his more famous anecdotes is unclear. For example, in the reminiscences King Edward VII in a Dublin Slum, Cameron recounts an event that 'took place' in 1885, when the young Prince of Wales - the future King Edward VII - accompanied by the Duke of Clarence, Sir Dighton Probyn and Cameron took a plain unidentifiable carriage into the Dublin slums of Golden Lane where the Duke of Clarence slipped and fell in a discharge of watery cabbage running in a gulley down the side of the road. Further anecdotes include massive dinners attended by Cameron, banquets, notes on actresses and opera singers that he had met, trials in which he provided expert testimony, jokes in official publications and a meeting with Winston Churchill to name but a few. However, Cameron returns time and again to the crusade of his life: the conditions of the working poor in Dublin and it is to these that he pays respect in his last two reminiscences entitled 'How the Dublin Poor Live' and 'Earnings of the Poor'. Sometimes witty, sometimes unbelievable, but always readable, Sir Charles Cameron's Reminiscences record the memories of an eighty-year-old man who had enjoyed a life well lived.