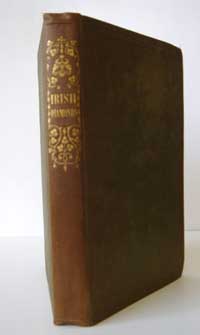 First published in London in 1847 by Chapman and Hall and republished here on fully-searchable CD-Rom is John Smith's Irish Diamonds; or, a Theory of Irish Wit & Blunders: Combined with other Kindred Subjects. Containing some 194 printed pages John Smith's publication is less offensive and more amusing to a contemporary readership that it would initially appear. Published at the height of the Famine in Ireland, the caricatures of the Irish peasantry, their wit and predilection to think with the heart instead of the head, according to the author and Maria Edgeworth would appear with hindsight to be more than a little crass and the pictures that adorn the publication are the stereotypical Paddy and Mr. Punch, that could be found throughout the latter's publication at this time. However, Smith's Irish Diamonds is not all that it would appear to be at first inspection, not least because of the real nature of the author, John Smith and his illustrator, the redoubtable 'Phiz'. John Smith was for many years the editor of the Liverpool Mercury and apart from the publication under review also had to his credit publications on mathematics and grammar and was a former lecturer of 'education and geographical science'. However, it was an event that took place in 1819 that was to form and shape Smith's opinions on government and placed him firmly with the plight of the working classes in both pre-Victorian and Victorian Britain. This sympathy with the ordinary man is redolent in his pursuit of what made the Irish as well as the Scots and English funny - or in some cases not. In his capacity as editor of the Liverpool Mercury, Smith was on the platform with other journalists at the meeting that took place at St. Peter's Field on 16th August 1819. Together with Richard Carlile, Smith left the platform before the Manchester and Salford Yeomanry arrived and the event that has gone down in history as the 'Peterloo Massacre' took place. Smith later gave evidence in favour of the protesters and published and pamphlet on events of that fateful day entitled An Impartial Narrative of the Late Melancholy Occurrences in Manchester and is commemorated by statue in Liverpool. The illustrator of Smith's Irish Diamonds was 'Phiz' or Halbot Knight Browne (1815-1882) renowned at the time as the illustrator of many of Charles Dickens' best known works as well as those of Charles Lever and Harrison Ainsworth. Smith's Irish Diamonds is an attempt to define and state what makes Irish wit and humour unique and stand apart from the rest of Britain. In this attempt Smith presents chapters on what makes wit and blunder in general and presents an overall theory of Irish wit in particular. These are followed by examples of Irish wit and humour, English humour and examples of wit and blunders from around the world. As a study in the sayings and humour or a people only a generation removed from their native language, Smith's observations on Irish humour, played-out against the backdrop of colonisation and the Famine show a large measure of pathos and humility by the author making Smith's Irish Diamonds a fascinating and unexpected read.