Return of Requisition Forms showing the Name and Address of Persons of the Belfast Union, 1888. (Download) 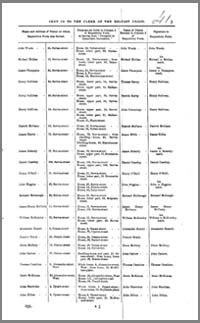 The full title of this Parliamentary Return from 1888 is Return "of the Number of Requisition Forms (directed to be Served upon Inhabitant Households by the third Sub-Section of Section 9 of 'The Representation of the People Act, 1884') sent in to the Clerk of the Belfast Union, with the words 'Occupied in Immediate Succession' Stamped thereon, showing the Name and Address or Addresses of the Person or Persons named therein in each case". In short this publication lists the names and addresses of approximately 500 people in the Belfast Union. It also lists the names of every other man resident in the same properties. There is also a very brief description of the property, if it is a whole house, part of a house, and whether the person was able to write. This information was gathered by designated overseer for the Union towards compiling an accurate list of eligible voters under the terms of the 1884 act which saw a substantial addition to the numbers of men entitled to vote. This is a very valuable resource for any one trying to trace ancestors in the Belfast Union prior to the 1901 Census.

Captain Charles Johnson, The Lives and Actions of the Most Noted Highwaymen, Street-Robbers, Pirates &c. &c. 1839