Bram Stoker, The Duties of Clerks of Petty Sessions in Ireland, 1879 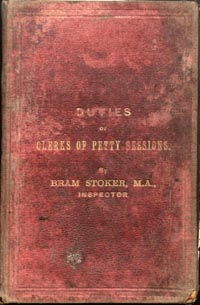 Long before the publication of his famous Dracula in 1897, or his many other novels and stories, Bram Stoker worked as the Inspector of Petty Sessions in Ireland. This important civil service job involved overseeing more than 600 petty sessions or magistrates courts scattered all over Ireland. These courts dealt with both criminal and civil cases, and tried the most minor offences. Judgements were made summarily (i.e. without a jury) by voluntary Justices of the Peace, or increasingly Resident Magistrates who received a salary. The whole system had been established formally by statute in 1827 (having operated informally for centuries). In 1851 new legislation had dictated the rules governing the role of the "clerk" or recorder of the courts, and the registers they were to maintain. These registers offer an extraordinary insight into local life in Ireland in the 19th century, and we are currently publishing them online at www.findmypast.ie. There are more than 15 million cases recorded, making these registers one of the most important sources for family history. In 1878 Bram felt it was essential that a proper guide be published to assist the clerks of these courts. Their role had been augmented by several court directives, statutes and orders, and there was no single source to aid them in their work. The resulting work, published in 1879, is republished here. It includes chapters on the salary and working conditions of a clerk, the general duties, preparing forms, stamps, fines, duties regarding dog regulation (a major source of court income) and returns to the central Registrar. This is followed by an extensive "Miscellaneous" section which takes up more than half the book. This lists every conceivable regulation that may be relevant in the functioning of the court, from the sale of food and drugs, dangerous lunatics, wages and employment legislation, civil registration of births deaths and marriages to staying cattle on the roads. The book ends with a comprehensive list of the 604 functioning Petty Sessions Courts in 1878 and a detailed index. This book is an insight to the functioning of the Petty Sessions or RM courts throughout Ireland. It is a valuable addition to our knowledge of how the court system worked, and the men and women who worked within it. We are extremely grateful to Michael Macnamara of the Jamaica Inn, Sixmilebridge for making this book available to us, and also to Dr. Paddy Waldron for access to many early registers from County Clare. The book and these early registers were formerly in the keeping of Georgina Frost, one of the first women to be a Petty Sessions clerk, and also Paddy's 1st cousin three times removed!