Forty-first Report of the Inspector-General of the General State of the Prisons of Ireland 1862, with Appendices, 1863 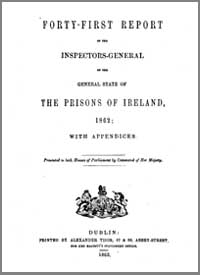 This 486 page report is an exceptionally detailed study on the committals carried out in 1862. A total of 26,024 people were imprisoned during the course of the year. Less than 1,000 were committed to penal servitude, whereas the rest were overwhelmingly imprisoned for terms of between 1 day and 3 years. More than 85% were sentenced to a month or less. The Report gives a great deal of detail about the prison population, by gender, age, religion and education. They were particularly interested in juvenile prisoners. In 1862 1,341 were under the age of 16, with 96 of those under ten years of age. 51% of prisoners were illiterate, which is probably a testament to the success of National Education over the previous generation. But the report is as much about the prisons themselves as the prisoners. Many of the smaller older prisons were notorious, and the Prison Board were keen to see them upgraded and improved. Their remit covered the custodial prisons, where it was hoped penal servitude would reform the character of the inmates, bridewells where prisoners were held for shorter durations. These bridewells were often attached to police barracks or court houses. The most infamous of prisons, the "black holes", were debtors prisons, where inmates resided until their debts were discharged. But in 1862 the Prison Board was also responsible for the many local lunatic asylums along with the national asylum for "dangerous lunatics" at Dundrum. Over 300 pages of the report is given over to a detailed analysis of every prison in the country, including details about the living conditions of inmates, the general condition of the buildings, quality of food, punishments, staff (usually named), numbers and types of prisoners, and much more besides.

Tables showing the number of Persons Committed or Held to Bail for Trial at the Assizes and Sessions in Each County in the year 1852, and the results of the proceedings, 1853