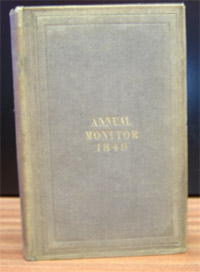 Published in London 1849, this edition of the Annual Monitor or Obituary of Members of the Society of Friends in Great Britain and Ireland for the Year 1848 presents a complete list of members of the Religious Society of Friends or Quakers, who died in 1848 with a few of the deceased who died at the very end of 1847. This published list of obituaries and death notices was compiled from the annual returns made by each of the Society's Meeting Houses in Great Britain and Ireland, those that had the greatest knowledge on the life of its members. In each instance the obituaries provide the age of the deceased, the date of death, the particular Meeting House attended and in most instances the marital status of the deceased. In many cases the obituaries given are fulsome. This should come as little surprise to those familiar with the Birth, Marriage and Death Records kept by the Society. Dating from the foundation of the Religious Society of Friends these records exhibit the Society's great interest in keeping records of its growing membership and their achievements for the benefit of God and society as a whole. However, the registers also exhibit the decline in membership from the first decades of the 19th century. Having said this, the Society's Birth, Marriage and Death Registers provide the greatest detail on individuals prior to the introduction of the Civil Registration in Great Britain in 1837 and 1864 in Ireland and in most cases extend far beyond the parochial records kept by the established Churches. For those of a genealogical bent, this edition of the Annual Monitor pre-dates the introduction of Civil Death Registration in Ireland by some eighteen years. Even a quick glance at the obituary list shows that many of the deceased attended meeting houses in Ireland and died during the height of the Great Famine in that country. While some of the obituaries provide the barest of details, many are accompanied by the quite lengthy death notices if not eulogies provided by the elders of deceased's Meeting House. For example, one of the last entries for 1848 concerns a young man named Cuthbert Wigham, a member of the South Shields Meeting House, who died aged only 26 in Madeira. Wigham's death notice recalls that as a youth he was drawn towards the 'powerful convictions of sin', but by the time of death had been forgiven for his sins. Suffering from consumption, Wigham spent the last months of his life at Funchall and extracts from his diary for this period accompany his obituary. Republished here on fully searchable digital format, the Annual Monitor for 1849 will appeal to anyone interest in the Religious Society of Friends in general and more specifically those with a genealogical interest in members of the Society.