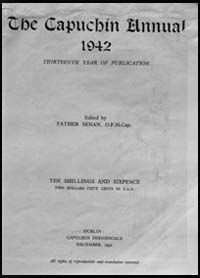 First published in December 1929, this edition is the December 1941 edition for 1942, and it is possibly one of the most eclectic annuals ever produced. The aim of the annual, published by the Capuchins in Ireland, was to "provide a complete and worthy survey of everything worthwhile in the life of resurgent Ireland". With numerous contributors and photographers the it focused on literary and artistic contributions, but was never afraid to discuss religion, politics and science between it's covers. The annual also had a stated aim of nurturing new young talent. This edition of the Annual is of particular interest as it was published shortly after the 25th anniversary of the 1916 Rising. With about 270 pages dedicated to the Easter Rising in Ireland, this edition provided a unique look at the events of the 1916 Rising as well as the commemorations. Included are personal recollections of Fr. Aloysius, a member of the Capuchin order, as well as Dr. James Ryan T.D., then Minister for Agriculture, Senator Margaret M. Pearse and Commandant Paddy Holahan. Also included are pieces on Terence McSwiney and Pearse as well as numerous other contributions as well as nearly 100 pages of photographs and original documents. The rest of the annual is made up of various pieces, including several on religious orders in Ireland, their work with the poor, as well as portrait photographs of many the religious leaders in Ireland. Along with several short stories and poems, there are numerous impressive illustrations, as well as a fascinating debate on the place of vivisection in modern science and medicine. This is a historically, politically and religiously fascinating publication and a must for anyone with an interest in Easter 1916 or the Capuchin order in Ireland.