John Gough, A History of the People Called Quakers, from their First Rise to the Present Time, 4 Vols, 1789-1790 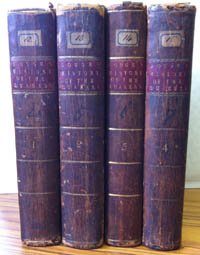 A History of the People called Quakers, from their first rise to the present time, is an extra ordinary source put together by John Gough and set over four volumes totalling over 2,200 pages. Volume One was first published in 1789 with Volume Four being published in 1790. Gough, who died shortly after completing his work on the final volume, spent much of his adult life in various educational positions throughout Ireland, having been born in England in 1721. His History was compiled from his own experiences as a Quaker as well as "authentic records and from writings of that people". The four volumes of the History are broken down in to eight individual books, and each volume is completed with an index to that volume. Volume One Book One begins with the life and experiences of George Fox and the first four chapter deal almost entirely with his life up to the dissolution of Parliament by Cromwell. Book Two continues this path and deals with the persecution of the Quakers during this period. There are numerous examples of the imprisonment, beatings and punishment of Quakers, as well as appeals to Cromwell and Parliament to end the abuse. Chapter eight of Book deals with the arrival of the William Edmundson in Ireland, "the first of the People called Quakers in Ireland". The remainder of Book Two deals with the arrival of Quakers in the USA, Europe and Asia. Book Three starts with the restoration of the King, Charles II, and the release of some 700 Quakers from imprisonment. However this was short lived and the persecutions soon resumed. Again there are numerous examples of the persecutions of Quakers both in England and New England. Chapter Twenty deals exclusively with Ireland and the persecution of the Quakers, and ends with the arrival of George Fox in Ireland. Book Four continues with the harsh treatment. Chapter Nine again deals exclusively with Ireland, covering meetings in Cork, Wicklow, further imprisonments and an account of Katharine Norton. Chapter ten covers Holland and Germany, Chapter eleven New England and the continued story of George Fox. Chapter sixteen again deals exclusively with Ireland, including an account of William Morris, Benjamin Bangs' visit, as well as the prosecution of William Edmundson, and the committal of John Burnyeat. Several chapters focus on the spread to the West Indies and further expansion into North America. Book five begins with death of King Charles and the faith of the Quakers under James II and while persecutions subside, the suffering because of tithes continues. Book six begins with the proclamation of William of Orange as King. The relative lack of suffering of the Quakers in Ireland, compared to their brethren in England, is noted in Chapter two, when a collection recommended in Ireland to help alleviate the sufferings in England. However, that was soon to change with the arrival of King James in Ireland and war. Before long Quakers in England are contributing relief to ease the sufferings in Ireland. Several chapters are then devoted to the further influence of the Quakers in America. The final volume begins with the ascent of Queen Anne to the throne and the attempts at maintaining the Act of Toleration. Book seven commences with the coronation of George I. Chapters two and three deal exclusively with Ireland, including visits by Benjamin Holme and John Burton and accounts of John Barcroft, Alexander Seaton, Thomas Wight and Thomas Wilson. The final four chapters of the book cover the situation in Pennsylvania. The final Book begins the accession of George III and ends with the death of the author in Ireland and some testimony about him. The scale of the work undertaken by Gough in producing these four volumes was enormous. While they are very much just the views of one person, it is still an important and seminal work on the Society of Friends and their beginning, the spread throughout much of the known world and the persecutions they suffered. For anyone with an interest in Quaker history this is an essential source.