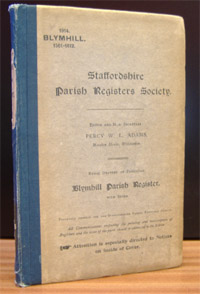 Published privately by the Staffordshire Parish Register Society in 1914, this volume, containing some 240 pages, includes all the parochial records for the parish of Blymhill for the periods 1561-1812, including baptisms, burials, marriages and in some cases marriage banns. The Parish of Blymhill, situated in the rural deanery of Penkridge and is made up of two ancient manors, namely Blymhill and Brineton, both of which were included in the Doomsday Survey of 1085-6. and the history of the parish and its divisions is provided in an ample introduction. Blymhill Church, which probably dates from the C14 is dedicated to the Blessed Virgin Mary and as of 1914 vestiges of the original church could still be viewed as could some of the artefacts from this period, such as a number of coffin lids. However, the original church was probably considerably older and was probably a Chapel of Ease to the Collegiate Church of Gnosall, becoming a separate Rectory sometime in the C12, from which date a complete list of the Rectors of Blymhill is extant, beginning in circa 1200 with Herbert de Blackenhall. The Blymhill parochial records are contained in six Register Books, the first entry being the baptism of Alice Cott'n on 5th April 1561. The transcriber of the Registers, the then incumbent of the parish, Rev. Bridgeman, noted than nothing of particular import could be drawn from the registers, no figures of especial historical importance featured and no centenarians buried in the parish. Of the more unusual Christian names featured in the records are those of Ileamgrath and General for boys and Appolina, Chrysagon, Clerry and Eletcha for girls. Rev. Bridgeman does note one extraordinary insertion in the registers made in 1670, when it was noted that Sarah the daughter of John and Priscilla Wood had two teeth when she was born and baptised! The parochial records themselves are presented and transcribed as found in the six Register Books, including remarks and comments made, for example in 1778 when a survey was made of the parochial buildings and edifices, farm implements and the like, which will be of particular interest to anyone interested in the history of the parish. The volume is concluded by an extensive named and places index. Republished here on fully-searchable CD-Rom, the Blymhill parish registers are a must for anyone with an interest in this particular parish.