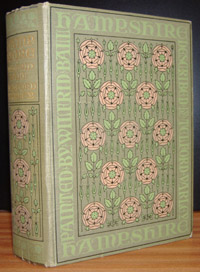 Hampshire was published in London in 1909 by Adam and Charles Black, noted as publishers of travellers guides. Containing over three-hundred pages of text by the Rev. Teleford Varley and over seventy-five illustrations by Wilfred Ball, Hampshire should really be subtitled: the history of a county from the earliest times to the present. Presented in fourteen chapters and fully indexed, Hampshire, is introduced by the author as 'mother of movements and or men' detailing in a fascinating chapter the Saxon origins of the county before the arrival of the Romans and a description of the topography of the county. At this time Hampshire was dominated by the Great Weald Forest, known as the Andreadeswald by its Saxon occupants of which the Wolmer Forest, the New Forest, Savernake and Cranborne are surviving fragments. Many a Hampshire name recalls the past of the Andreadeswald and the counties Saxon lords such as Wolmer - Wolves mere - recounting in the author's words what 'a savage district' this formerly was. A not insubstantial portion of Hampshire is given over to its Roman history for they left their indelible marks throughout the county and in Silchester and to a lesser extent Winchester - Venta Belgarum - the county boasts some of the finest Roman antiquities in the country, and in Silchester's case the almost undisturbed English Pompeii. Some three chapters of Hampshire are given over to the development of Winchester and its historical college. Further chapters are devoted to the areas associated with famous literary figures such as Jane Austen, Charles Kingsley and Gilbert White and the history, topography, geology and geography of each. Other areas of interest in Hampshire include histories of the New Forest, the Test Valley, Romsey and the Avon Valley, each of which are accompanied by Wilfred Ball's illustrations. Perhaps of even more significance are the author's observations on the developments of Hampshire as a maritime county and to illustrate this significance ample account is given over to the histories of the counties dominant marine settlements of Portchester, Southampton and Portsmouth. Varley gives fascinating insights into the piecemeal developments of Portsmouth in particular, which was derived from the various marine necessities dictated by naval architecture and states that if one set out to find beauty in Portsmouth this could be found aplenty. Hampshire should appear to anyone with an interest in the county, its origins and importance as the gateway of invaders and merchants alike. Of equal import are descriptions of the coastal cities of the county before they were irrevocably changed by the ravages of the WWII and the subsequent urban development of the likes of Portsmouth and Southampton. The original text is fully-indexed and this republished CD-Rom version of Hampshire is fully-searchable.