Cusack's Life of Daniel O'Connell, The Liberator, His Times - Political, Social and Religious, 1872 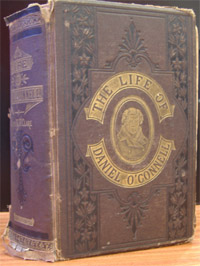 First published in 1872, the Life of Daniel O'Connell, the Liberator, was written by Sister Mary Frances Cusack otherwise Margaret Anne Cusack, the 'Nun of Kenmare'. Born into a Protestant aristocratic family in Dublin, Cusack was received into the Catholic faith by Cardinal Wiseman in 1858 and in 1861 she was sent, with a small group of nuns from Newry, Co. Down, to establish a new branch of the Order of St. Clare, known as the Poor Clares - in Kenmare, Co. Kerry. While here Cusack established the Kenmare printing company and by 1870 more than 200,000 editions of her religious and historical works had been sold around the world, the profits from which established the Famine Relief Fund. In 1871 Cusack's works generated some £15,000 for the Fund and by the time of her death in 1899 she had written over 35 historical and religious books. The Life of Daniel O'Connell, the Liberator was published by the Kenmare printing company and dedicated to 'the Catholic Priests and to the Catholic People of America'' and offered as the history of the 'Most illustrious Irishman of Ancient or Modern Times'. The biography extends to some 870 pages and is prefaced by a 42 page introduction. Daniel O'Connell was born at Darrynane Abbey, a remote corner of Co. Kerry, in 1774 and by the time of his death had already entered into the pantheons of Irish heroes, his legacies enduring the test of time. The first chapter of Cusack's history details the life of O'Connell from his birth, early education and influences in Ireland and France through to 1790. Some 200 pages of the biography are given over to the influences engendered in O'Connell's early life, ranging from politics, the law, education and religion, that were to inform O'Connell's later political actions. Indeed, more than half of Cusack's biography pre-dates O'Connell's establishment of the Catholic Association. Not surprisingly, great store is given in Cusack's biography to O'Connell's achievements and his eventual success with regard to Catholic Emancipation. However, writing only 25-years after the Liberator's death in 1847, Cusack glossed-over O'Connell's failure to achieve Repeal of the Union and the last decade of his life in a mere 60 pages. This is hardly surprising, given that this was one of the few blemishes on an otherwise illustrious career and an area of O'Connell's career that later historians have also struggled to unravel. The Life of Daniel O'Connell, the Liberator is concluded with extracts from the diary of O'Connell's personal servant and notes on the pedigree of the O'Connell family of Derrynane Abbey. The Life of Daniel O'Connell, the Liberator is fully indexed and is searchable on this digital republication. This publication must appeal to anyone with an interest in Irish history in general and more specifically one of the greatest political figures in modern Irish history, written by a woman who has also passed into the annals of Irish history.

The Fifth Report of the Deputy Keeper of the Public Records of Ireland, 1873

Smith's Ancient and Present State of the County of Kerry, 1756