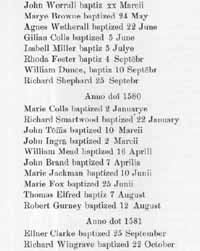 The Parish of Stewkeley, Buckinghamshire, was transcribed by the incumbent of the parish, the Rev. R. Bruce Dickson, M.A., and published by Eben Putnam at Salem, Massachusetts, in 1897. The Stewkeley Parish Register, one of the oldest in Buckinghamshire, came to be transcribed and privately printed after a visit to the parish in 1892 by a member of the Putnam family in search of his family's origins. After an examination of the chaotic register, which was somewhat worm-ridden and unbound, the Putnams proved that before emigrating they originated from the parish, and took it upon themselves to put the register into the public domain. The register published in this fully-searchable CD-Rom details the Baptismal Records for the parish for the periods 1545-1653, Marriage Records covering the dates 1599-1646 and Burials 1599-1653. The Parish Church of Stewkeley dates from the 11thc. and is mentioned in the Doomsday Book and is situated some four miles to the west of Leighton Buzzard. Many of the family names that appear in the registers were still prevalent on the parish in the 1890s, while at the same time also being commonplace in areas of New England in America, to where some of the parish's inhabitants emigrated. Entries in the Baptismal Register are unremarkable and provide the barest of details - the child's name and date of baptism - until the first years of the 17thc., at which point the vicar began to provide the fathers' names. In the case of burials, in almost every instance of a child's burial the father is also named as is the marital status of women. Entries for the periods spanning April 1624 to December 1634 are a little more informative: the Baptismal Register providing both parents forenames and in some instances places of residence are given for both bride and groom in the Marriage Register. The third and final volume of the parish register covered in this publication covers Baptisms, Marriages & Burials for the periods March 1635 to December 1646 and continues the details provided in the second volume. The Parish Register for Stewkeley, republished her on full-searchable CD-Rom, should interest any genealogist or family historian interested in the earliest available parochial records for Stewkeley.