The Poll Book of Monmouthshire, 1847 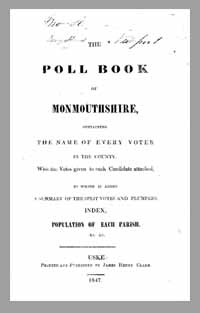 The full title of these CD-Rom republication, "A List of the Voters in the County of Monmouth with the Votes given to each Candidate, at the Contested Election of 10th and 11th August 1847", was formerly the possession of John Lloyd of the King's Head, Newport, who dated his Poll Book September 1847. The Monmouth election of August 1847 took place between three candidates, namely Lord Granville, donated as 'G' in the Poll Book, Octavius Morgan Esquire as 'M' and Captain Somerset as 'S'. Prior to the advent of the secret ballot and universal sufferage Poll Books contained the names of registered voters who were qualified to vote by property ownership as well as the candidate for whom they had cast their vote. The 1847 Monmouth Poll Book is no exception. At the time of the enumeration of the 1841 Census of England and Wales the population of the County of Monmouthshire contained some 134,314 inhabitants compared to the number of qualified and registered voters in the county in 1847, which amounted to a mere 5,365, of which only 4,436 cast their vote in the election. The Monmouth Poll Book for 1847 is arranged firstly by Polling District and within each Polling District by Parish. The names of all the registered voters is given in the Poll Book and these are arranged alphabetically within each of the Polling Districts were the voter was registered and qualified to vote, the names of registered voters were given irrespective of whether or not the registered voter actually cast his vote. The abode of each voter is also given, which in a considerable number of instances is not within the same polling district on even county, indicating an absentee who retained land or property interests within the county of Monmouth. Finally, the Poll Book records the name of the candidate for who each voter cast his vote. The result of the August 1847 election was as follows: 'Majority of Mr. Morgan over Lord Granville 104. Majority of Lord Granville over Capt. Somerset 43'. Presented here as a fully-searchable CD-Rom, John Lloyd's Poll Book for the 1847 Monmouth election should appeal to anyone interest in the politics of Monmouth, its election and notable residents.