A Directory of Sheffield, 1787 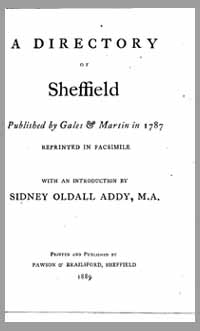 First published by Gales and Martin in 1787, this republished edition of the Sheffield Directory was published in Sheffield in 1889. Although a somewhat slight publication, the whole including an introduction extends to only 126 printed pages, the Sheffield Directory for 1787 is full of curios, and extremely useful details on the merchants, traders and manufacturers of the town. The full title of Gale and Martin's Sheffield Directory gives and indication as scope of the publication: "A Directory of Sheffield Including the Manufacturers of Adjacent Villages: with the several marks of the Scissor and Filesmiths, Edgetool and Sickle Makers. To which are added, the Regular Setting out and Return of Posts; And a Correct List of the Coaches & Wagons". Apart from a number of partial directories for the town of Sheffield published in 1737 and 1774, Gales and Martin's Sheffield Directory is one of the oldest and most complete for the town and as such can be seen as somewhat of a rarity. The printing of the Sheffield Register coincided with the establishment of the short-lived newspaper, the Sheffield Register, the publishers of which were also Joseph Gales and David Martin. The Sheffield Register ceased publication in 1794 after Gales and the paper and be accused of sedition, Gales fleeing to America, where he died. Gales co-publisher, David Martin was a Sheffield engraver and was responsible for the engraving on the title page of the Directory, showing the west front of Sheffield Market Place, Martin also published independently six engravings of views of Sheffield. In 1791 this showed a rural idle before the onset of Victoria industrialisation. The Directory itself exhibits the pursuit of some unusual trades for 21st century tastes. For example, ____ Sleigh of Pond Lane was advertised as a 'cock weapon maker', a common enough trade in Sheffield at the time. But it is to the tradesmen and their marks that most benefit can be derived from this Directory. Many of these are of simple design and point to the origin for the trades person. For example, Thomas Blake of Green Lane used the trademark 'Wath' and Robert Skidmore that of 'Eyam', which were undoubtedly the villages from whence the tradesman originated. It is only to be lamented that Gales and Martin's desire to open an ongoing Registers for Sheffield's tradesmen was curtailed by their departure. It was announced by the publishers that at they had 'opened' a trades Register in their shop and an manufacturer that may have been omitted from the 1787 publication was invited to enter his particulars in the Register as were any new businesses, and or alterations in partnerships. It is much to be lamented that the Register, which was also to include notices of deaths in the preceding year did not come to fruition. Republished here on fully-searchable CD-Rom and containing an alphabetical list of tradesmen in the Sheffield and the adjoining neighbourhood, together with an alphabetical list of notable residents of the town, the 1787 Directory of Sheffield is a little gem of a publication.