Report of an Enquiry into Working Class Rents, Housing and Retail Prices, 1908 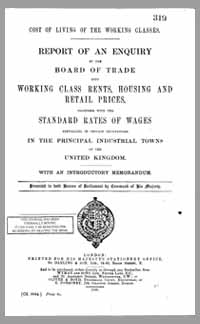 Containing some 670 pages, the Cost of Living of the Working Classes is the Report of the first phase of results of a British Parliamentary Enquiry conducted by the Board of Trade into the conditions of the working classes throughout Britain and Ireland. Data presented in the report dates from enquiries made in October 1905 and the findings were presented to both the House of Commons and Lords in 1907. The full title of the Report provides a clear indication into the nature of the Parliamentary Enquiry: Cost of Living of the Working Classes. Report of an Enquiry by the Board of Trade into Working Class Rents, Housing and Retail Prices, together with the Standard Rates of Wages Prevailing in Certain Occupations in the Principal Industrial Towns of the United Kingdom. The introductory memorandum to the Report reported that the comparative level of rents of working-class dwellings, of the prices commonly paid by the working classes for meat and other food commodities and fuel as well as wages paid were investigated in a total of 94 industrial towns: 77 in England and Wales, 11 in Scotland and 6 in Ireland. In the majority of cities the wages for the following trades were provided: all components of the building, engineering and printing trades and in most instances a category labelled 'transport', which included the weekly wage for both the skilled and unskilled in each category. Where a specific trade or industry was prevalent in a town, for example the linen trade in Belfast, figures statistics were included for sub-categories of that trade. Ten percent, or some 60 pages of the Report are given over to Ireland. In Dublin the Enquiry examined the relative wages for the building, engineering, printing, furnishing and transport trades and reported on the average weekly wages to be found in all categories for these industries, which ranged from 19 shillings to just under £2 a week. As for the housing stock inhabited by the majority of these working class people, the Report noted that much was made of of houses that had originally been built for the well-to-do, but now accommodate five or more families, most deficient in basic sanitation and the majority in a dilapidated condition or out of repair. The average rents paid for these tenements were between 2 and 3 shillings a week for a single room, rising to 6 to 8 shillings for four rooms or more. The Report concluded that Dublin exhibited the greatest level of overcrowding and most unsatisfactory housing conditions in the United Kingdom. The Enquiry also investigated and reported on the average prices of all the staples of living - except clothing - necessary for the working class family; these included all basic food stuffs, eggs, bread, meat, sugar, tea and methods of heating including the prices of coal and paraffin. The Report into the Cost of Living of the Working Classes intimated that comparative enquiries were then being undertaken in France and Germany, which would of made for the most extensive enquiry into conditions of the working class ever undertaken. As it stands the report into the Cost of Living of the Working Classes is an invaluable social document produced when the conditions of the working classes throughout Europe were to change forever due to the impact of World War One. Republished here on fully-searchable CD-Rom, the Cost of Living of the Working Classes will make a valuable addition to the social and family historian alike.