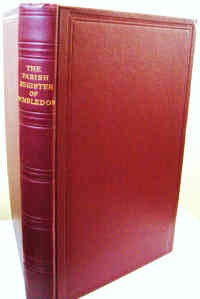 Published in London in 1924 for the John Evelyn Club for Wimbledon, the Parish Register for Wimbledon, Co. Surrey, is the complete record of Baptisms, Marriages and Burials in the parish from January 1539 until 1812. The keeping of Parish Registers in England was instituted on 5th September 1538 by Thomas Cromwell Vicar-General and afterwards Earl of Essex, who was himself born and educated on the Manor of Wimbledon and who afterwards became its Lord. Although there was some initial passive resistance to the keeping of parochial registers in England as it was believed that they might lead to additional taxation the institution of the parochial record keeping was commonplace by the reign of Elizabeth I, although a few injunctions were latterly required to formalise the records kept. This was most notable in 1644 when Parliament found it necessary to direct parishes to record the names of the parents of baptised children and also to regulate the registering of baptisms and burials. This aside, the entries for the Baptismal Registers for Wimbledon commence in January 1538/9, marriages in October 1594 and Burial in January 1593/4. The Baptismal Registers continue almost unbroken down to their cessation here in 1812, whereas there some noticeable gaps in the Marriage and Burial Registers. All the Registers are very meagre during the Civil War periods, notably for the years 1637-1643. As a parish which held a reputation as a 'healthy neighbourhood' coupled with its proximity to London, Wimbledon was the favourite resort of gentry and civic officials alike and the parochial records hold more than their fare share of members of the peerage. Interestingly, the Manor of Wimbledon was one that observed the custom of 'Borough English', meaning that descent of land passed to the youngest rather then eldest son and failing a male heir passed to the youngest daughter. This being the case, after baptism many of the elder children of the parish disappear from the parochial records. The original parochial records for the parish of Wimbledon are contained in 8 volumes and the transcriptions of these records contained in this fully-searchable CD-Rom republication extended to some 260 printed pages. Included in the original publication are extensive indexes of family and personal names as well as persons mentioned in the text. The original publication does not include and index of occupations. The Parish Register of Wimbledon, Co. Surrey, is the only known complete record of the parish's Baptismal, Marriage & Burial Records for the periods 1538/9 to 1812 and as such must appeal to anyone with a genealogical interest in the parish or an interest in the social and topographical history of Wimbledon before it became part of greater London.