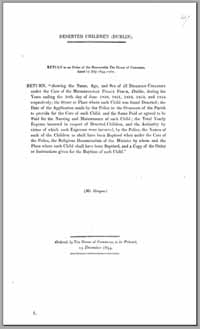 This small publication is taken from a Return made to the House of Commons in July 1854 and is a report on the all of the deserted children taken into the care of the Dublin Metropolitan Police Force in the years ending 30th June 1850 to 1854. The Return accounts for about 500 children taken into the care Dublin Metropolitan Police Force and provides the following details on each child under eleven headings: where known the child's name. In most cases the child's name was not known, but in a number of cases children's names have been inserted and in a few cases this includes siblings. age: in most cases the children taken into the care of the police were only days old or at most months. However, in a number of cases, for example that of Eliza Bennett in January 1854, the child was 8 years of age. Sex: male or female. Place or location where found: in the majority of cases a street number is given and in only a minority of cases was the location of the deserted child a church. The date the overseers took charge of the child: as the date of discovery of the deserted child was not recorded in the Report, it is not clear how long the deserted children stayed in police care. The sums agreed to be paid for the nursing of the child: these were negligible. In most cases no monies were agreed to be given over for the nurse care of the deserted children as these were taken into the care of the parish. Those children for which monies were given over were those where the parish refused to take the child. Names given to children if baptized while in the care of the police: these were the unnamed children that stayed under the charge of the police where the parish had refused to provide for their maintenance, once again, a minority of the total number of children. Religious denomination of the Minister who baptized the children that remained in police care: in only one case was the child not received into the Roman Catholic faith. Remarks: this is perhaps the most telling and informative section of the Report. The remarks tend to note the eventual fate of the child. In most cases the deserted children were either taken into the care of the parish or received into the Union Workhouse system. However, this was not always the case. For example, a nine-month old female child found deserted at Roundtown was given-up to her mother who was promptly arrested, presumably for the desertion of her child! Or the case of an eight-day old child found deserted on Farrell's Lane and baptized according to a note pinned to his clothes. Overall, a minority of the deserted children were repatriated with their mother's, all of who were arrested and a very small number were either adopted or taken on by private individuals. The majority of the children were, however, either taken on by the overseers, received into the Union Workhouses or in about 20% cases died within days of being taken into care. The Report on Deserted Children provides a unique snapshot into the social conditions of Dublin for a five-year period and provides a graphic picture as to the fate of deserted children in Dublin for the periods 1850-54.