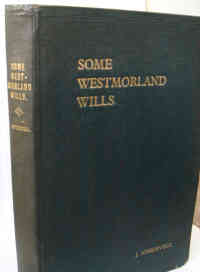 The first edition of Some Westmoreland Wills was published in Kendal by Titus Wilson & Son in 1928. The Wills and Administrations, including many inventories span the periods 1686 to 1738 and were edited by John Somervell, the author of Isaac and Rachel Wilson, Quakers, of Kendal, 1714-1785. All of the wills summarised in this collection are those of Quakers attending the Society of Friends' Meeting House at Kendal and those that appear are summaries of certified copies of wills that were collected at the Kendal Monthly Meeting of the Society of Friends. Many of these had their inventories attached together with the official Latin proofs. As a socio-economic group Quakers placed great importance on making wills and viewed this practise as the most opportune way of avoiding disputes that could and did arise over intestate estates. To this end the wills and their inventories contained in Some Westmoreland Wills should be of some interest not only to those especially concerned with the Religious Society of Friends, but also those that may have an interest in the life experienced by many members of the rural community in and around Kendal in the late 17th and early 18th centuries. The testators' are drawn from many sections of Kendal rural society and their occupations include yeoman farmers, tanners, woollen manufacturers, millers and urban tradesmen such as glovers, stockiners and wood mongers. Given, as the editor notes, the propensity to have large families at the time that the wills were made, it is strange to note that the average number surviving child beneficiaries in the wills is just two, denoting the extreme nature of childhood mortality at this time. The introduction to Some Westmoreland Wills hints at the riches that can be gleaned from the everyday and extraordinary lives of the testators. These include a 17th century inventory of oak furniture of a Kendal joiner; that of a distiller who owned shares in three ships plying their trade from Milnthorpe to Barbados; and a number detailing their holdings in the New World. Many of the inventories point to the small scale of herding taking place in Kendal. Little of the land was enclosed and the few rough tracks that passed as roads were so poor as to prevent milk farming. With the absence of the root crops in the district over-winter feed consisted entirely of hay, little of which could be grown because of the lack of small nature of many of the holdings. Pigs appeared to be a scarcity and there are no mention of sheep dogs, geese or ducks in any of the inventories. The principal crops mentions are oats, barley and hay whereas wheat, rye and flax seldom appear in the inventories. As security grew amongst the Quakers in Kendal and the surrounding area inventories and proofs as recorded and summarised here were became less and less frequent and the last recorded instance of such was in 1738. Some Westmoreland Wills includes photographs of a number of the farmsteads features in the testators' wills, a glossary of local terminology and is fully-indexed both by the names of the local farms and by name. Republished here on fully-searchable CD-Rom Some Westmoreland Wills must appeal to anyone interested interested in the local history of the Kendal area and the people that used to farm and live in the area.