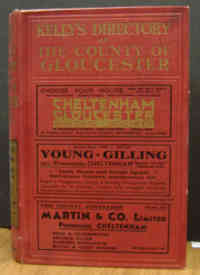 Published in London in 1935, Kelly's Directory of the County of Gloucester boasted that the publication was the 'oldest and largest directory published in the world'. While this may or may not have been an idle boast county directories always contain a plethora of fascinating information and Kelly's Directory for Gloucester is no exception. Containing some 570 pages, Kelly's Directory contains information on all of the market towns, villages and cities situated within the county of Gloucester shortly before the outbreak of WWII. This is an important detail, because Kelly's presents statistical and topographical information prior to the fundamental changes brought about to all the counties of the UK by war. Importantly this edition of Kelly's Gloucester contains a detailed map of the county. As a statistical compendium Kelly's provides details on the counties population and records quite graphically the predominantly agricultural nature of the county at this time. This fact is highlighted by the amount of the county's land under tillage and grazing and large numbers of harriers, hounds and hunts present in the county all redolent of a bygone era. Apart from advertisements, which have an interest of their own, the vast majority of the Directory is comprised of the 'Towns and Villages Directory'. This contains a cornucopia of information on all of the noted places in the county. Beginning with the village of Abenhall and with Wyck Rissington, each village and town is introduced by a short topographical, historical and statistical description. These descriptions include the civil and religious situations of each village and abstracts from the 1931 Census of Population, usually recording the population of village and parish and the area in statute acres. The chief products from each area are also recorded as are any noted natural or manmade landmarks. As one would expect from a county directory, Kelly's records the chief private residents of each village and town as well as the commercial establishments and trades that could be found. The directory also noted the chief modes of public transport to and from the villages, methods of post, but notably very few telephone numbers. The chief towns and cities of the county are treated on in some detail. Cities and towns such as Bristol and Tewksbury as well as the city of Gloucester are prefaced by a not inconsiderable topographical and historical description for the earliest times through to the 1930s. In the case o f Tewksbury this description extends to five pages of two columns each and describes the ancient borough and market town from its ancient status as borough and market town and establishment of the first Christian Church in the 7th century by the missionary monk Theoc, through the incorporation of the borough by Elizabeth I in 1574 and a description of large number of 'ancient houses' that could be found in Tewksbury and the surrounding area. Also listed are all the corporation, official, public and local institutions and is especially replete with the commercial establishments in the borough. This is hardly surprising as most traders would have used directories such as Kelly's as their chief mode of advertisement. For those unfamiliar with commercial directories such as Kelly's these have much to recommend them. These are not telephone directories, but more akin to commercial and historical compendiums on the areas they treat. This CD-Rom republication is fully-searchable and is recommended to anyone with an interest in the county of Gloucester.

J.N. Brewer, The Beauties of England and Wales, or Original Delineations, Topographical, Historical and Descriptive, of each County. Vol. XII - Part II Oxfordshire and Rutlandshire, 1813