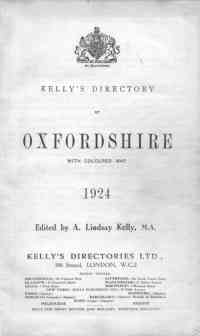 Republished here on full-searchable CD-Rom is the 11th edition of Kelly's Directory of Oxfordshire, which was published in 1924. Containing some 550 printed pages, Kelly's Directory, as the then editor, A. Lindsay Kelly correctly noted, was primarily a directory, but also served as the gazetteer for every county for which Kelly's Directory was published, and this Oxfordshire edition is no exception. Importantly this edition contains the detailed county map included with the book. The directory includes every parish in the county and provides a thorough topographical description of every town, parish, village and township, describing the principal buildings and geographical objects of interest in each. Great care is also taken in Kelly's treatment of the ecclesiastical divisions of the county with descriptions of all the churches, cathedrals the value of the livings, parochial incumbents and patrons. The same level of detail is provided for the civil and local administration of the county with full information on Oxfordshire's Hundreds, Unions, county court districts fairs, markets as well as communications such as rail and post throughout the county. Beginning with Adderbury and ending with Yelford, for those who might be unfamiliar with a directory such as Kelly's the degree of information contained on each village can be gleaned from the description of the first entry in the Towns and Villages section of the directory. Adderbury is described as a parish containing the villages of East and West Adderbury and the chapelry of Milton. Of Adderbury East, Kelly's records its geographical extent and location, its ancient church of St. Mary's with its clock and eight bells. Details of the chancel, altar and memorial dedications within the church are also described in some detail. The living was stated to be the gift of New College, Oxford and with the vicarage was valued at some £330 per annum. Historically, Adderbury was recorded as being intimately linked with the Wilmot family since the reign of Charles I when Henry Wilmont, son of Sir Charles Wilmot, Viscount Athlone, was created Lord Wilmot of Adderbury and later the Earl of Rochester. Kelly's also describes the ancient Manor House built by the Bustard family and the annual court leet held by Arthur Stockton, Lord of the Manor of Adderbury. Kelly's entry for Adderbury is concluded with a list of the principal residents and commercial interests. While Adderbury is a relatively small hamlet within the county of Oxforshire as a whole, the level of detail recorded here is typical throughout the directory. This edition of Kelly's Directory of Oxfordshire is concluded by an extensive alphabetical list of the county's chief residents and commercial interests that could be found across the length and breadth of Oxfordshire in 1924. In addition to these expected but key features of any useful directory are usually some unexpected bonuses. In this instance Kelly's offers the reproduction of an ancient map of the county as well as an updated coloured map and a revised description of the county's geology. For anyone with even the slightest interest in the residents, topography of descriptions of the county of Oxfordshire this fully-searchable 1924 edition of Kelly's Directory of Oxfordshire is heartily recommended.

William Whyte, The New Picture of Edinburgh for 1816