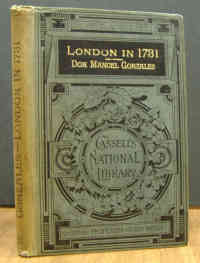 "London in 1731: Containing a Description of the City of London, both in Regard to its Extent, Buildings, Government, Trade, etc.", is a curious publication and was first brought to press in 1745 as part of the 'Harleian Collection', consisting of two volumes entitled 'Voyage to Great Britain, Containing an Account of England and Scotland' and 'A Collection of Voyages & Travels, compiled from the Library of the Earl of Oxford'. London in 1731 supposedly written by one Don Manoel Gonzales, a literary pseudonym, which has engaged some considerable investigation, with some pointing to Daniel Defoe as the publication's original author. Defoe died in the year that London in 1731 was first published and it has been supposed that portions of the book issued from the travel collections to be found in the library of Robert Henry, 1st Earl of Oxford who died in 1724 and by additions to the library by his son, the 2nd Earl. This edition of London in 1731 is taken from John Pinkerton's General Collection of the best and most Interesting Voyages and Travels of the World, which was published between 1808 and 1818. Although the precise date of the composition of London in 1731 and the identity of the author is still unknown, the book takes the reader through a tour of London in the time of Defoe, Pope and Samuel Johnson and gleanings from the text place its date of origin somewhere between the last years of the reign of George I and the first years of George II. This was a time when Covent Garden, formerly the gardens of the Convent of Westminster, was just ceasing to be the resort of the most fashionable of London Society as the moved to the first of London's great Squares: Grosvenor Square. This was also the age, indeed the height, of the Coffee Houses and the author or authors treat these with great favour. London in 1731 is introduced with a description of the eight gates into the City before a lengthy account of the Tower of London. Full of quips and interesting intelligence of early Georgian London, this was an age when the infamous Tower of London Zoo - disbanded by Queen Victoria - but very much alive during the reign of George I, containing lions, tigers, eagles and other exotic animals sent to British Monarchs from foreign dignitaries, a practice that had prevailed since the establishment of the fortress by William I. London in 1731 is republished here in full-searchable CD-Rom and provides a fascinating account of early Georgian London through the eyes of 'someone' intimate with the City.

The Poll Book for the Electors of Newcastle Upon Tyne, 1835 DOWNLOAD