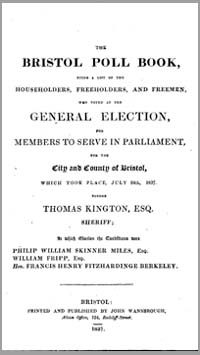 Printed and published in Bristol in 1837 by John Wansborough, The Bristol Poll Book's full and descriptive title reads as follows: "The Bristol Poll Book, being a list of the Householders, Freeholders, and Freemen, who voted in the General Election, for Members to Serve in Parliament, for the City and County of Bristol, which took place, July 24th 1837. Before Thomas Kington, Esq. Sheriff." The candidates that stood for election for the City and County of Bristol on July 24th 1837 were Philip William Skinner Miles, Esq., for the Conservative Party, William Fripp, Esq., also for the Conservative Party and the Honourable Francis Henry FitzHardinge Berkeley, described as a 'Radical' Liberal candidate and by the accounts recalled in the introduction of the Bristol Poll Book the election as well as the final result was a particularly acrimonious affair. The introduction details in some twenty pages the speeches of the candidates on the 22nd July, the day on which nominations were opened, as well as the Sheriff's Returns on 25th July. This announced that Mr. Miles was duly elected with 3,838 votes and the Hon. Francis Berkeley with 3,212 was returned as the second Member of Parliament over Mr. Fripp who received 3,156 votes. However, there were calls for a recount of the Hon. Francis Berkeley's votes as it was revealed that Berkeley's officials had proffered 400 gifts of £6 to the poor Freemen of Bristol in return for their votes. However, the result was not overturned and Berkeley, the illegitimate son of the 5th Earl, sat continuously as a Member of Parliament for Bristol from this election until his death in 1870. As for the Poll Book itself, this contains the names, addresses - business and private - of more than 5,000 men who cast their votes on 24th July 1837. The Poll Book is arranged firstly by parish and within each parochial return the names of the voters together with the candidates for whom they voted is recorded. The usefulness of Poll Books in general is not to be underestimated and far exceeds their socio-political interest. As an item of record, the 1837 Poll Book contains many more names of merchants, traders and gentlemen resident in Bristol than any contemporary trades or street directory and in most cases contains just as much information on the voters' business activity and place of residence as a trades directory. Republished here on fully-searchable CD-Rom, the Bristol Poll Book for 1837 containing the names, addresses and business of more than 10,000 Bristonians must appeal to anyone with a family or historical interest in Bristol and the surrounding area.

J. Bulmer, History, Topography and Directory of Lancaster and District, 1913