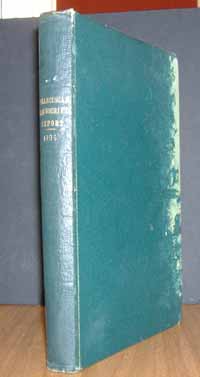 Published in London and Dublin in 1906 from a report to the Houses of Parliament by the Historical Manuscripts Commission, the Report on Franciscan Manuscripts details the manuscripts that had survived from the establishment of the Irish Franciscan College of St. Isadore in Rome especially those detailing communications with its first Guardian, Luke Wadding. These manuscripts have since been known as the 'Wadding Papers'. These manuscripts were transferred from Rome to Dublin in 1872. The Franciscan Manuscripts were transcribed and edited by G. D. Burtchaell and J. M Rigg and this fully-searchable CD-Rom republication of their work contains some 320 pages, the majority of which does not antedate 1624. By its very nature much of the Franciscan Manuscripts were ecclesiastical in their nature, but this does not mean that they hold little interest for the lay reader in fact the obverse is true. From the date of its foundation and the inception of Luke Wadding, Ireland was gripped by events that followed the counter-reformation and later by war that was also defined by religion. Indeed, much that is of interest in the manuscripts take the form of letters to Luke Wadding concerning the periods 1641 to 1645 and it had been independently shown time again that his correspondents were largely well-informed and accurate in their portrayal of the events taking place in Ireland during this pivotal period of its history. Chief amongst Wadding's correspondents during the periods 1641 to 1645 were Hugh Bourke, Dr. Edmond Dwyer and Don Jayme Nocher. Although the true identity of the latter remains a mystery, he was a Irishman of learning in both Gaelic and Spanish, was probably a Franciscan and held the confidence of the Spanish Ambassador; it is also of some little note the Don Jayme Nocher communicated with Wadding in cipher as did Dr. Edmund Dwyer, agent to Rome from the Archbishops of Cashel and Tuam. Pope Urban had so little regard for Dwyer that after being captured on his return from Rome to Ireland, the Pope refused to pay the remainder of Dwyer's ransom fee after a Huguenot merchant had paid the majority share. However, it is from Hugh Bourke, Commissary of Irish Friar Minor in Germany and Belgium that Wadding received some of his most accurate news of events from Ireland and England and the level of knowledge of many of the correspondents is quite phenomenal and details many of the personalities of the 1641 rebellion such as the Marquis of Ormond and Owen Roe O'Neill. This fully-searchable digital republication of the Historical Manuscripts Commission Report on Franciscan Manuscripts must appeal to anyone with an interest in the 1641 rebellion in Ireland and the communications made to Luke Wadding in Rome during this period.