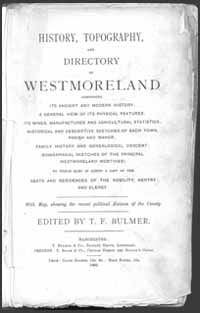 Published in Manchester in 1885 by T. Bulmer & Co., the full title of the Westmoreland Directory amply describes the breadth and depth of this publication: 'History, Topography, and Directory of Westmoreland, Comprising its Ancient and Modern History; A General View of its Physical Features; its Mines, Manufactures and Agricultural Statistics; Historical and Descriptive Sketches of each Town, Parish and Manor; Family History and Genealogical Descent; Biographical Sketches of the Principal Westmoreland Worthies, to which is also added a List of the Seats and Residences of the Nobility, Gentry and Clergy', in short, a completed compendium of Westmoreland in 1885. Containing just over seven hundred printed pages and republished here on fully-searchable CD-Rom, the Westmoreland Directory is introduced by an historical narrative of the county's settlement followed by a description of its geography and geology. This is followed by a section on all aspects of the county and local government of the county ranging from the constabulary to the county's accounts and the names and seats of the nobility, gentry and clergy of the county. However, this is just a forward to the majority of the directory, which consists of an alphabetical description of all of the villages, towns, cities and parishes contained therein. An example of just one of these will suffice to indicate the breadth, depth and usefulness of this publication. Of the parish of Crosby Garrett, the Westmoreland Directory introduces the parish by providing its gross area and income and population in 1871 and 1881 - which had fallen from 585 to 224 - before providing a topographical and historical description of the parish, which derived its name from 'Cross Town' and its is supposed that Garrett was an ancient owner of the manor. However, as the Directory reports, there is no historical record of the Manor prior to 1296 when it was held by the Soulby family. The parish is dedicated to St. Andrew and the earliest portions of the Church for which there is a detailed description dates from the 12th century. There follows descriptions of the parochial schools and places of worship and the notable hamlets and villages that were situated within the parish, together with all of the residents of note. This level of description and record is to be found throughout the directory and in places even exceeds the quite detailed description provided for Crosby Garrett. While the original publication contains no overall listing for the nobility, merchants and traders featured in the Westmoreland Directory, as this CD-Rom is full-searchable this absence is not burdensome. For anyone interested in the descriptions of the places and people of Westmoreland in the late 19th century this is an essential resource.

A Collection of Coats of Arms Borne by the Nobility and Gentry of the County of Glocester, 1792