John Southerden Burn, The History of Parish Registers in England (also including Scotland, Ireland, the East and West Indies), 1829 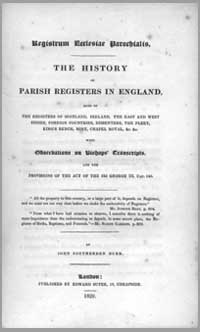 First published n London in 1829 by Edward Suter and republished here on fully-searchable CD-Rom is John Southerden Burn's 257-page Registrum Ecclesiae Parochialis or The History of the Parish Registers in England, also of The Registers of Scotland, Ireland, The East & West Indies, Foreign Countries, Dissenters, The Fleet, King's Bench, Mint, Royal Chapel, Etc., with Observations on Bishop's Transcripts, and the Provisions of the Act of 52d George III. Cap 146. Over a period of many years Southerden Burn had collected a miscellany of information from the parish registers her had professionally examined. It was noted that since the establishment of procedures for keeping accurate birth, baptism, marriage, death and burial records during the reign of King Henry VIII, Government had periodically sought to pass legislation for regulating the records kept as was the case in 1812 under Provisions of 52d George III Cap 146, which should have standardised the good keeping and preservation of parochial records. It was, however, lamented that by 1829 provisions laid out in the Act had not been met in two important respects, namely the sufficient details were still not being inserted in parochial records being kept and transcripts of all parish registers were not being made and lodged annually with the Bishop's Archives. The latter point was deemed to be most lamentable if by some disaster the originals were lost or damaged. At the time of writing Southerden Burn noted that that the first issue, the level of detail kept in parish records was especially woeful, making them largely speaking devoid of interest. This was, however, not always the case, especially in the earliest periods of record keeping, which record 'memoranda of every description', which Southerden Burn wished to illustrate in this publication. Southerden Burn begins The History of Parish Registers in England by describing from the earliest times - references are made here to biblical records - the origin of parochial records culminating, are far as England was concerned, with the Injunction of Thomas Cromwell in September 1538 instigating the keeping of parochial records as we understand them today shortly after the advent of the Established Church of England. Most parochial records in England hope to trace their origins to this date when there were many more parish churches than there are today. This is followed by the legislation passed through parliament and elsewhere relating to the keeping of parish registers between 1538 and the Act of 1812 and an amendment Bill of 1824. These latter legislative measures set out the standard forms in which parish records were to be kept. On the state and preservation of parish registers in which many explanations are proffered for large blank spaces in many parochial records as well as many other interesting observations in record keeping in England in general. This is followed by lengthy observations of the many peculiarities that can be witnessed in birth/baptism, marriage, death/burial registers throughout England and Southerden Burn goes into some considerable detail in noting and explaining how these peculiarities arose as well as the plethora of extraneous detail on individuals denoting the culture and customs of particular areas before turning his attention to the parochial records outside of England. Commenting on the Kirk Session Records of Scotland Southerden Burn noted that of the 850 parishes present in Scotland only 99 were believed to keep regular and correct parish records and of these only but a handful of records pre-dated the start of the eighteenth-century and from these he provides many illustrations of the types of records kept. There follows an analysis of, with the exception of the Religious Society of Friends and the Jewish community, the woeful record keeping for the many dissenting religions present in England. The History of the Parish Registers of England is concluded with a number of chapters on the utility of parochial records in general, general observations and index. Republished here on fully-searchable CD-Rom, John Southerden Burn's The History of Parish Registers in England presents a thorough critique of the parish registers of England, their origins anomalies and uses and is a must for the contemporary user of parish records in England.