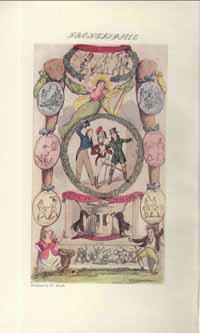 First published in 1821 by an anonymous author calling themselves a 'Real Paddy', this edition of Real Life in Ireland, was published in London in 1904 and has as its subtitle 'of the day and night scenes, rovings, rambles, sprees, bulls, blunders, Boddekeation and blarney of Brian Boru, Esq., and his elegant friend Sir Shawn O'Dogherty; Exhibiting a real picture of characters, manners, etc., in high and low life in Dublin and various parts of Ireland embellished with humorous coloured engravings, from original engravings by the most eminent artists'. Commentators have observed that Real Life in Ireland was a natural continuation of Pierce Egan's (1772-1849) hilarious volumes on Life in London. Indeed, the anonymous Real Paddy has sometime been attributed to Egan. Like Life in London, Real Life in Ireland was initially shunned by educated readers and even a quick glance at the language and misdeeds of the central characters, Brian Boru and Sir Shawn O'Doherty, reveal that such a publication may once have been able to cause and give offence. However, Real Life in Ireland is more akin to the works of Flann O'Brien and although written nearly 200 years ago is very readable and very funny. Opening with the discharge of Shawn O'Dogherty from college in Dublin with a small fortune to spend, he is joined from the country by his friend Brian Boru, who along the way is regaled by the stories of Peg O'Shambles, a one-time cockle picker from Ringsend in Dublin, who has fallen on hard times due to her alcoholic husband's misdeeds. Accompanied by many humerus cartoons of Brian Boru's adventures, the characters travel from Belfast to make merry in Dublin. While the characters in Real Life in Ireland might be fictitious the places, events and the Hiberno-Irish featured throughout are not. Although a comparison with James Joyce's travels through Dublin is perhaps hardly appropriate, Real Life in Ireland provides a clear account of Dublin and its inhabitants, as well as the major sights and attractions of its suburbs. Perhaps unintentionally, Real Life in Ireland has left and account of the 'real' trials and tribulations of Ireland in the 1820s? For example, the new harbour at Dalkey is rightly criticised as a waste of money and time the long awaited visit of George IV lamented, but not much regretted. All-in-all, the 368 pages of Real Life in Ireland make for a highly entertaining and extremely funny read and has much to recommend it to a modern readership that might be unfamiliar with its kind.