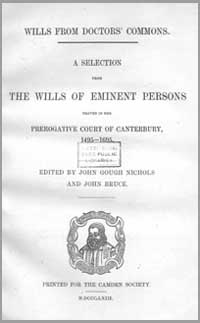 Wills from Doctors' Commons. A Selection from the Wills of Eminent Persons Proved in the Prerogative Court of Canterbury, 1495-1695, was printed and published for the Council of the Camden Society for its 1862-1863 transactions. Edited by John Gough Nichols and John Bruce, the then director of the Society and member of its council, Wills from Doctors' Commons is republished here on fully-searchable CD-Rom. Containing 184 printed pages this publication contains the transcripts of only thirty-two wills and a number of administrations, annotated by Nichols and Bruce, but the importance of the wills contained herein cannot be questioned, which is true for all wills which abound with the manners, customs and laws from the periods in which they were written and as such their importance for historical and literary research is beyond doubt. The Register of Wills from which these examples were extend over a considerable period of time, from 1383 until the time of the publication of this collection. The wills were entered chronologically in order of proof in gigantic quarto volumes and the repository as a whole held more than 2,000 of these volumes, making the collection under review a mere drop in the ocean. Each quarto volume was distinguished by the embossed name of either the name of the first testator or eminent person contained therein. Although this publication contains a mere fraction of those proved in the Prerogative Court of Canterbury all of those featured are for eminent personages, which include four members of royalty, prelates, nobility, five men who distinguished themselves during the English Civil War and amongst the others there are the wills of Sir Francis Walsingham, Sir Francis Drake and Sir Thomas Gresham. The collection is not absent of wills made by women and numbered amongst these are the mothers of Queen Katherine Parr and Lady Jane Grey. The first will featured in the publication is that of Cecily Duchess of York, mother of Edward IV, proved in 1495, requested that her body be lain next to that of her husband, Richard Duke of York, who had been killed at the Battle of Wakefield in 1460, buried at Pontefract, but removed to Fotheringay in 1466. Among the beneficiaries of the will were Henry Duke of York, later King Henry VIII, who was bequeathed a number of tapestries. Sir Francis Drake's will, proved in 1595, is remarkable for the fact that his will was made on board his ship off the coast of South America where he died following the execution of the will. The last will noticed, proved in 1695, is that of Henry Purcell, who was appointed organist of Westminster Abbey at the age of eighteen and died aged just thirty-seven, but who name is still remembered. Although only a brief collection of wills, this CD-Rom republication of Wills from Doctors' Commons contains sufficient wills of eminent and remarkable men and women to make this an interesting and worthy addition to any collection.