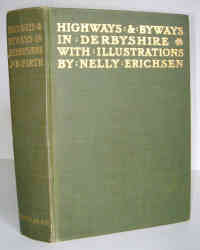 Originally published in London 1905 by MacMillan & Co., Ltd., this first edition of the Highways and Byways in Derbyshire, is republished here on fully-searchable CD-Rom. Macmillan began publishing the Highways & Byways series in 1899 and by 1909 had completed almost twenty publications in the series, which extended across the length and breadth of England, Scotland and Wales, with one publication on Normandy and and another on Ireland. This highly popular series continued until the beginning of the Second World War. In May 2009 Pan Macmillan reissued a one-volume collection of the best of the Highways and Byways series offering a glimpse of the very best of Britain. The original publication of the Highways and Byways in Derbyshire contains more than 500 printed pages, including several maps recording the meandering routes taken by the book's author, John Benjamin Firth, who chose to take many short trips from a central points, and more than 80 pen and ink illustrations by Nelly Erichsen, providing as with all of the Highways and Byways series a wonderful mix of topography, local history and folklore, which perhaps more than ever allows the reader to rediscover parts of Britain that have long disappeared or have been forgotten. John Benjamin Firth undertook more than thirty expeditions across the length and breadth of Derbyshire, which he stated were more or less arbitrary, but always preferring the byways to the dusty highways of the county, and these are noted under the following chapter headings: Melbourne; Repton; Sudbury; Ashbourne; Dovedale; Beresford Dale; Arborlow; Buxton; Dove Head; Chapel-en-le-Frith; Ashopton; Eldon Hole; Tideswell; Cressbrook Dale; Bakewell; Haddon Hall; Chatsworth; Baslow; Froggatt Edge; Stoney Middleton; Eyam and the Plague; Lathkill Dale; Darley Dale; Matlock Bath; Cromford; Heage; Wingfield Manor; Ashover; Ambergate and finally Derby itself. Much of the charm a vigour of the Highways and Byways series which has stood the test of time is down to the travellers and in the case of Derbyshire this is no exception. John Benjamin Firth (1868-1943) was a prolific author, writing works on Constantine the Great and Augustus Caesar; translator of the letter of Pliny the Younger, which was still in use by scholars in the 1970s, a journalist for the Daily Telegraph as well as the author of three further editions in the Highways and Byways series. The Highways and Byways in Derbyshire is illustrated with more than 80 pen and ink sketches by Nelly Erichsen, an illustrator who flourished between 1882 and 1917 and for who Italy was as familiar as Derbyshire having already illustrated works entitled Venice and its Story and the Story of Assisi. Nelly Erichsen's illustrations of Derbyshire are delightful and compliment Firth's text beautifully.