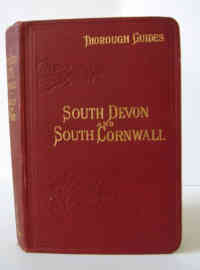 Republished here on fully-searchable CD-Rom is the 8th edition of Baddeley & Ward's Guide to South Devon and South Cornwall, originally published in London by Thomas Nelson & Sons., in 1915. Published as part of Baddeley and Ward's 'Thorough Guide' Series, this edition contains 405 printed pages and carries the full title of Thorough Guide Series: South Devon & South Cornwall with a Full Description of Dartmoor and the Isles of Scilly. Mountford John Byrde Baddeley (1843-1906) distinguished himself as a guide book writer of the late 19th early 20th centuries, with his first 'Thorough Guide', that to the Lake District, being published by Dulau in 1880. This publication alone went through 23 editions, the last being published by Hammond in 1978 illustrating the enduring appeal of the format of Baddeley's Thorough Guides, which encompassed twenty regions throughout England, Scotland, Wales and Ireland. This edition of the Baddeley's Thorough Guide to South Devon and South Cornwall was edited by W. Baxter, the text written by Charles .Slegg Ward with maps and plans by J. Bartholomew and includes some twenty pages of advertisements, list of golf courses, approaches and an introduction. Written for the independent tourist travelling on foot, bicycle by coach or rail these guides were at the time of their publication particularly highly regarded and praised in the national newspapers for their accuracy, tasteful topographic descriptions and beautiful maps and these aspects of the Thorough Guides series was as true then as it is today. The 8th edition for South Devon and South Cornwall includes a number of gradient route maps designed for cyclists, which also note dangerous bends in roads and approaches into towns and villages. The Thorough Guide to South Devon and South Cornwall includes thirty-four main destinations, which are Lyme Regis, Seaton, Sidmouth, Exeter, Exmouth, Dawlish, Teignmouth, Newton Abbot, Torquay, Dartmouth, Totnes, Kingsbridge, Salcombe, Dartmore, Ashburton, Bovery Tracey, Lustleigh & Moreton Hampstead, Chagford, Okehampton, Lydford, Tavistock, Ivybridge, Plymouth & Devonport, Liskeard, Lostwithiel, St. Austell, Truro, Fowey, Falmouth, The Lizard, Marazion, St. Michael's Mount, Penzance and the Isles of Scilly. Each of the destinations is accompanied by descriptions of how to get there be it by rail, bicycle or coach and on arrival where to stay. From these focal points the Thorough Guide provides notes for all the activities available in the area, such as notes for walkers, notes for cyclists, anglers, golfers and the like as well as learned topographical descriptions provided by Ward on the local buildings, places and sights of interest. From each stopping point the reader is offered a number of day trips or excursions, which are aimed walkers with varying levels of fitness to cyclists prepared to cycle more than 100 miles in a day! One of the distinguishing features of the Thorough Guides series are the excellent maps and plans that accompany the guides and the 1915 edition for South Devon and South Cornwall is no exception. This edition includes fourteen coloured, contoured maps as well as a number of street plans, as well as a diagram of the interior of Exeter Cathedral and coloured route-maps specifically designed for cyclists. The nature of the maps, showing reliefs and gradients are akin to modern discovery series Ordnance Survey Maps all of which mark the routes described in Ward's text. The 1915 edition of the Thorough Guide to South Devon and South Cornwall is an excellent travel companion for the environs that it covers and all editions in this series have now become eminently desirable to collectors, the maps alone making this CD-Rom republication a worthy edition to anyone with an interest in the north Devon and Cornwall areas of England.