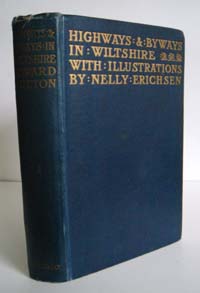 Originally published in London 1917 by MacMillan & Co., Ltd., this first edition of the Highways and Byways in Wiltshire, is republished here on fully-searchable CD-Rom. Macmillan began publishing the Highways & Byways series in 1899 and by 1909 had completed almost twenty publications in the series, which extended across the length and breadth of England, Scotland and Wales, with one publication on Normandy and and another on Ireland. This highly popular series continued until the beginning of the Second World War. In May 2009 Pan Macmillan reissued a one-volume collection of the best of the Highways and Byways series offering a glimpse of the very best of Britain. The original publication of the Highways and Byways in Wiltshire contains more than 450 printed pages, including a map of the county showing the routes taken by the author, Edward Hutton, who chose a number of circular routes that took him to the four corners of Wiltshire, and almost 90 pen and ink illustrations by Nelly Erichsen, providing as with all of the Highways and Byways series a wonderful mix of topography, local history and folklore, which perhaps more than ever allows the reader to rediscover parts of Britain that have long disappeared under a morass of concrete, bypasses and motorways. Edward Hutton undertook twenty-seven topographical tours upon which he reported in the Highways and Byways of Wiltshire, numbered amongst which were the following: Old Sarum; Salisbury; the Meads; the Salisbury Avon; Valley of the Bourne; Amesbury; Stonehenge; Upper Valleys of the Wyle, Winterbourne, Nadder and Ebble; the Dorest Border; the Somerset Border; Devizes; Savernake Forest and its villages; Marlborough and district; Avebury; Swindon; Cricklade; concluding with a number of tours along the valley of the western Avon and the foothills of the Cotswolds. Much of the charm a vigour of the Highways and Byways series which has stood the test of time is down to the travellers and in the case of Wiltshire this is no exception. A British author with a penchant for travel, Edward Hutton (1875-1969) was as familiar if not more so with Italy than Wiltshire, having already published a biography on Boccaccio, and books on Florence, Northern Tuscany, Genoa, Ravenna and Italy and the Italians, by the time he took-up his topographical tour of Wiltshire for Macmillan. However, as with his Italian excursions, Hutton, in the words of the New York Times in a review of one of his earlier works remarked, Mr. Hutton is a man of candour and keen observation and wit, attributes he brought to the fore in his writing of the Highways and Byways of Wiltshire. Highways and Byways in Wiltshire is replete with almost 90 pen and ink sketches by Nelly Erichsen, an illustrator who flourished between 1882 and 1917 and for who Italy was also familiar having already illustrated works entitled Venice and its Story and the Story of Assisi. Nelly Erichsen's illustrations of Wiltshire are a delight and compliment Hutton's text beautifully.